Menu
No post to display.
Pumped Up By Renewables 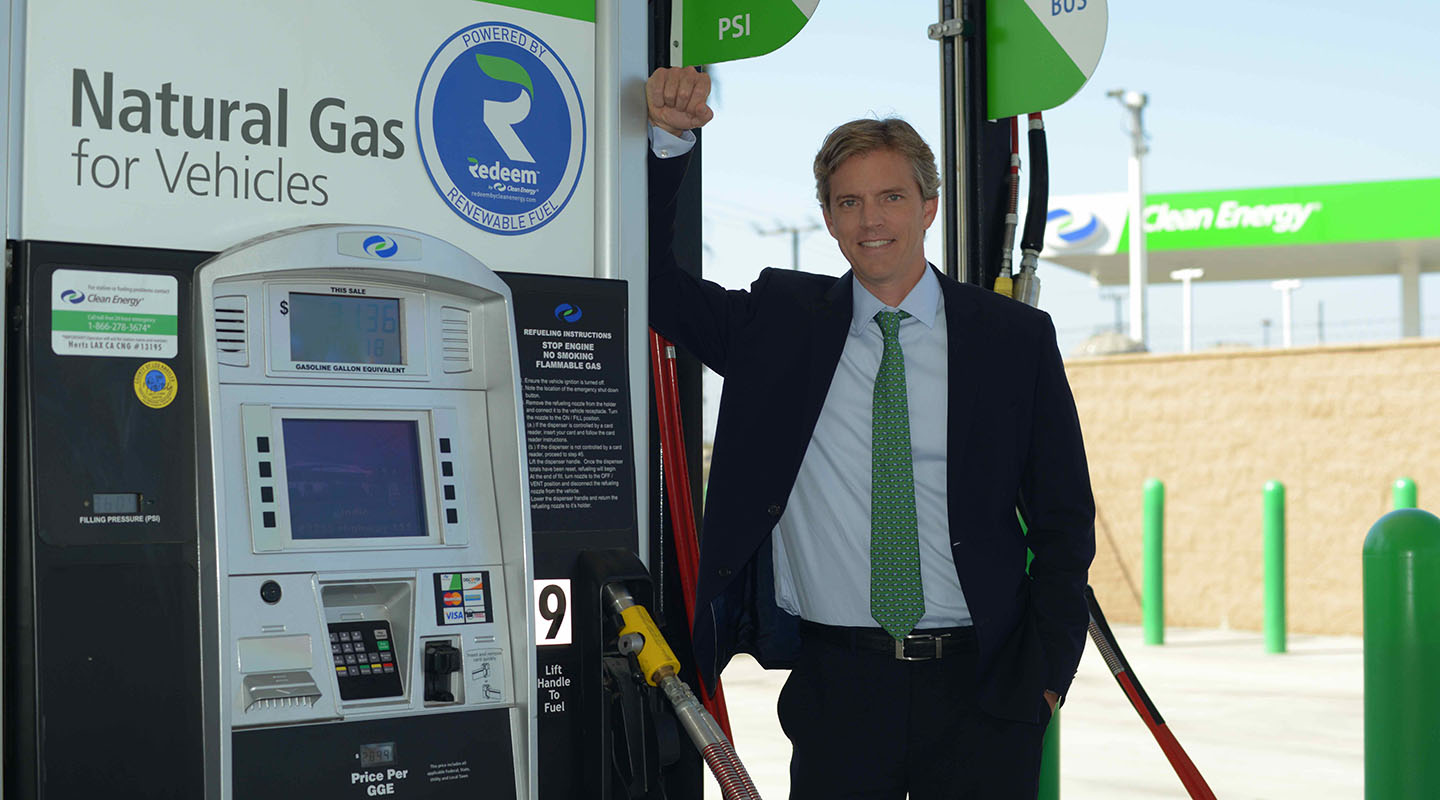 Harrison Clay ’92 has always been fascinated by the natural environment. In college, he went to Africa and studied baboons. He wanted to write for National Geographic. He flew to South America on an open-ended ticket and camped through Peru, hiked the Inca Trail to Machu Picchu, and spent time in the Amazon.

Those experiences gave him the passion to protect the environment even after he came back to the U.S. and enrolled in the University of Virginia’s law school with the goal of practicing environmental law. However, he “sold out,” as he puts it, and dove instead into the world of venture capital. He worked for a law firm with an office in Buenos Aires and had an offer to move there, but when the economy went under in 2000 the office there closed, and Clay was happy to do any workhe could find. He’d had a client that was an investment bank that specialized in IPOs, and one of their clients was a small firm called Clean Energy Fuels, which was about to go public.

“Honestly, I didn’t know you could use natural gas as a vehicle fuel,” he says. “It never really registered that it was as big of a thing as it is.”

Clean Energy sells renewable natural gas, a by-product of decomposing organic material, and turns it into clean-burning fuel for automobiles, buses, and tractor trailers. Clay’s passion for IPOs and the environment was about to be combined in a perfect way.

He worked on the IPO of Clean Energy and “learned the industry inside and out,” he says. The company hired him and made him president of their renewable natural gas subsidiary in February 2008. He led the efforts to develop biomethane as the choice of natural gas production for fleet vehicles and other uses, as well as promoting public policies to support the development of biogas products.

“It’s a very clean-burning fuel,” Clay says. “It’s abundant, and as I was researching the business to fully understand it…this lightbulb went off.”

That lightbulb was triggered by the realization that the supply of methane, the particular natural gas that comes from municipal garbage dumps and large animal feeding operations, could be a “permanent” solution to the nation’s dependence on foreign oil, and a way to reduce the greenhouse gases contributing to climate change.

Clean burning and abundant, natural gas can be used in ways traditional gasolines can’t. “Would you want to be scrambling your eggs over a diesel stove?” he asks. “We’re not importing it from the Middle East or contributing to geopolitical conflicts. We can rely on our own resources.”

Producers of biogas, whether that’s a dairy with 10,000 cows or a municipal garbage dump, get royalty payments based on the eventual selling price of the biogas, similarly to the landowners who get a royalty check from traditional oil production.

Clean Energy’s biogas production business was purchased in March 2017 by global fuels giant BP, and Clay became BP’s vice president of strategic development, global environmental products. These days, he’s involved in biogas and biomethane project development, procurement, and supply. And he’s working on sustainability and low-carbon fuels, which he sees as the future of energy development.

Indeed, Clay sees opportunity for biogas production all around. With thousands of concentrated animal feeding operations throughout farming country, plus the tens of thousands of municipal garbage dumps, all producing methane, there are abundant opportunities to harvest biogas here in the United States.

“Anywhere there’s lots of people, there’s lots of organic waste and a lot of potential,” he says. What’s needed now is for the regulatory environment to see the potential for biogas production in all 50 states.

“You want to use renewable fuels in your house,” he says. “When you go out to the pig farms and capture that methane and process it and use it as vehicle fuel…you’re actually reducing carbon and greenhouse gases. It’s carbon negative. When you capture methane and combust it, you’re displacing fossil fuels, which is an incredible benefit. It’s an enormous opportunity, and until we’re capturing all the methane [that’s being wasted], we’re losing out.”