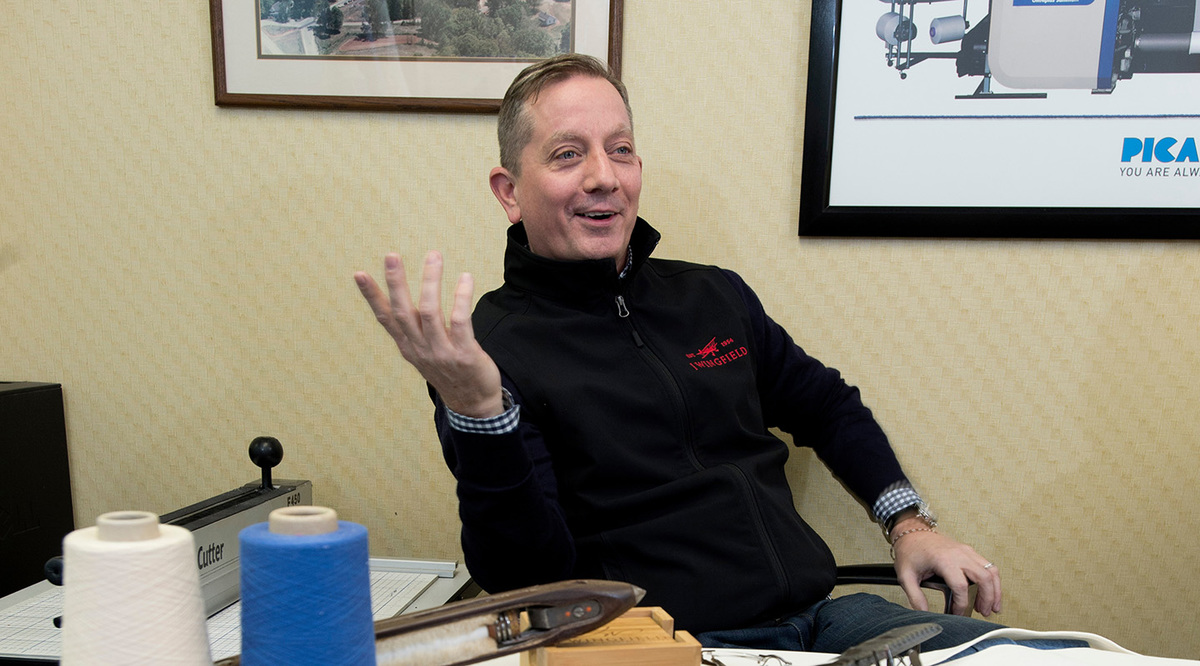 For more than 20 years, Albert has been bringing many of the most iconic toys to life, from Tickle Me Elmo to Zoomer Dino. 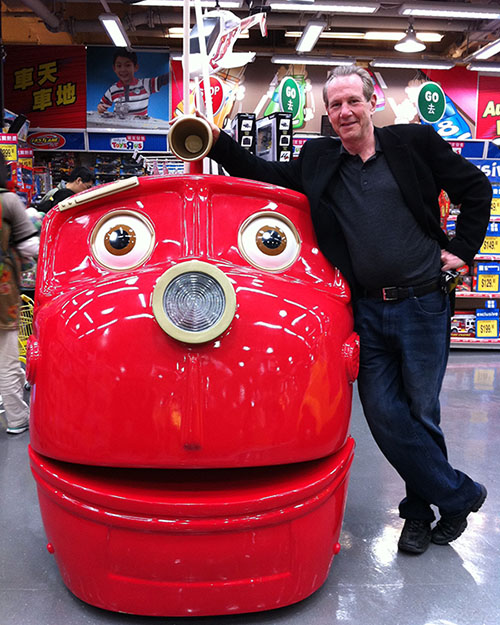 They've been keeping children (and our inner child) company for a generation, with unique personalities and voices all their own.

We stand in line on Black Friday for them, sing along with them, and travel back to prehistoric times with them.

And if it weren't for Charlie Albert '69, they would just be inanimate objects.

For more than 20 years, he's been bringing many of the most iconic toys to life, from Tickle Me Elmo to Zoomer Dino. They say that imitation is the sincerest form of flattery. Well, it is and it isn't when your focus groups are children.

"Somebody says, 'I want you to create a really cute robot personality in audio,'" Albert says. "They always refer R2-D2. But they don't want it to be R2-D2. 'We love Mickey Mouse and Elmo, but it has to be something new.' We're the guys they come to."

They have worked on more than 7,000 products, including five that were awarded the Toy of the Year Award, known in the industry as the TOTYs. It's the Oscars of toys. You might have heard of several of them such as Sing-a-ma-jigs and Hatchimals.

"We're pretty sure we're working on next year's hit toys," says Albert, whose clients include Hasbro, Mattel, and Disney. But there are no sneak previews in this business.

"It's like working with spies," Albert says. "We are under all kinds of [nondisclosure agreements], which are super strict. We're not allowed to talk about what we're working on at all. We're trusted."

It wasn't always top secret for Albert, who received a music degree from Stanford University after graduating from Taft. For the first 10 years of his career, he was a professional musician and later ran a recording studio and founded an amplifier manufacturing business. At the time, Albert's brother worked for SEGA, a pioneer in the video game industry.

"My brother said, 'The big opportunity is in games. They will take over the world,'" Albert says. "What I quickly learned was audio in the game world was pretty primitive. I saw an opportunity to be inventive."

Albert, who majored in the flute and plays the guitar and piano, started doing sound design for SEGA and Sony PlayStation. Their development platforms weren't exactly encrypted. "You got information on that through a bulletin board that they had which was pre-Web," Albert says. "My password was music."

Albert worked on the video game Sonic the Hedgehog, but it was Elmo that rocketed his career.

"Every single syllable is sliced into a separate file," he says. "The toy contained six seconds of audio, but it played for 30 or 40 seconds, all told."

The two most reliable members of Albert's focus group, sons Eugene and Miles, are now grown up. Miles works for the family business, while Eugene worked there for a few summers.

"Trying to be a great boss in many ways is the most rewarding aspect of having our business," Albert says.

"I look at candy as the sum of science and creativity." 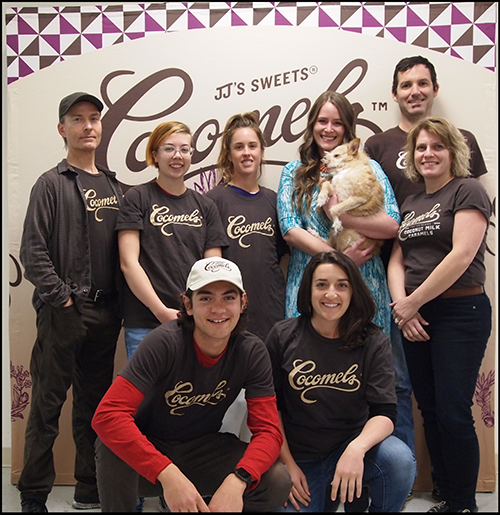 The title on his business cards says "Chief Candyman." JJ Rademaekers '89 signs all of his emails that way, too.

Who knew that what started out as a one-man enterprise selling chocolate-covered caramels and other confections at the Boulder, Colorado, farmers' market would turn into a career reset and national candy brand for this former scientist and musician?

It was late 2009 when Rademaekers had a premonition that would ultimately become JJ's Sweets, maker of Cocomels.

"I had a literal dream one night where I found myself in this kooky Wonka world," he says. "I woke up the next day and had these great candy ideas. This was a transitional phase between jobs, so I was open to a new direction."

Rademaekers puts the wonk in Willy Wonka. The Charlie and the Chocolate Factory character never concerned himself about too much sugar. Dairy-free and vegan ingredients would have been stranger than fiction. But not for Rademaekers, who uses coconut milk instead of butter and cream in his signature Cocomels, which are award-winning, organic, non-GMO and gluten free.

No wonder you can find Cocomels at 3,000 retail locations, from HomeGoods to Whole Foods and from Kroger to TJ Maxx. They're sold on Amazon and in airports.

"I sort of look at candy as the sum of science and creativity," he says. "I've been a longtime food geek and hobbyist chef."

In his former life, Rademaekers worked as a scientist for the U.S. Geological Survey and as a musician for 13 years. "I also worked for a carbon offset start-up for a little while," he says.

Then Rademaekers turned his home into a test kitchen, whipping up an early version of his Cocomels, hard candies, and brittle for his friends for the holidays.

"When they came over to the house, they'd give me positive feedback," he says. "Then I'd bring them to parties."

Soon, the married father of two turned his homemade confections into a cottage industry, asking his friends if they wanted to purchase them. "After a week or so I had to stop taking orders," he says.

The following spring, Rademaekers applied to be a vendor at the local farmers' market, where he started selling Cocomels and giving out samples.

"It was sort of great face-to-face consumer insight studies," he says. "From there it started to take off on its own."

The demand for Cocomels became so high that JJ's Sweets and its six employees couldn't handle the volume in-house. So they turned to some family-owned candy factories in Chicago to crank them out without sacrificing quality. Quality control is not a problem for Rademaekers, though.

"Yes, I still do have a sweet tooth," he says. "It's my duty to be on top of the latest and greatest candies."

"This is a customer that does care where their product is coming from." 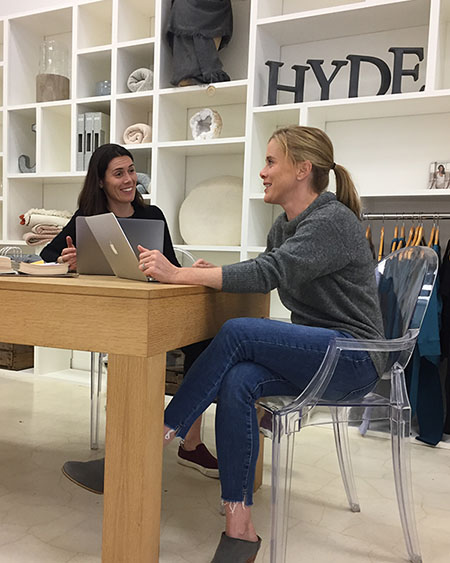 Alignment is everything in yoga, from humble warrior to side plank.

But AK Kennedy L'Heureux '90 recognized that something was amiss in the Zen lifestyle—and it wasn't the bend in her knee or angle of her spine.

For all the "body is my temple" mantra of yogis, the vast majority of yoga apparel has been made overseas from synthetic material.

"This is a customer that does care where their product is coming from," L'Heureux says. "I liked the feeling of natural fibers next to my body when I was doing yoga."

This past fall, L'Heureux and her business partner, Brook Cosby, relaunched Hyde organic yoga apparel company, a dozen years after its inception as an eco-conscious alternative to mass-produced athleisure wear. If you own a yoga mat and sweat-wicking leggings, you know who the manufactures are.

They moved their business across the country from New York to Marin County, California, but that wasn't the only change.

"I didn't want it to be made in China," L'Heureux says. "So over time, we continued to look for factories in the U.S. as the quality of the Chinese goods started to [deteriorate]."

L'Heureux was keenly aware of the reputation of organic yoga clothes for women, the "hippie-dippie" tie-dye look with Buddhas all over them. "It was crazy expensive," she says. "The quality was terrible."

After six months of searching the U.S. for a supplier, Hyde discovered a family-owned factory in Los Angeles to make its pants, crop tops, and other clothes.

"It's almost like starting over," L'Heureux says. "We moved our warehouse. We moved our office location."

Not only was it critical for their clothes to made from natural fibers and in a socially responsible way, they had to be functional.

"There's no tie digging into your back when you lie on the floor to do a backbend," L'Heureux says.

While she's been practicing yoga for 20 years and completed a teacher certification course, L'Heureux took time to find her career niche. She went to art school in California, then she worked for a company that sold rugs made in Nepal.

"I sort of got the small business bug," says L'Heureux, who is married with three children, including a 10-month-old.

As a small business owner, L'Heureux has an appreciation for the value of a dollar. All of Hyde's yoga pants sell for less than $100, unlike some of the big-name manufacturers. And their customers never have to worry about their pants being too revealing, like some other brands.

Thirty-five stores in 16 states carry Hyde apparel, which can also be purchased on the company's website and through wholesale. "So we're getting there," L'Heureux says.

"We are on an adventure to bring quality made-in-the-U.S.A. products back and to do so in a way that's affordable, has a positive impact on the environment, and is done in a sustainable way." 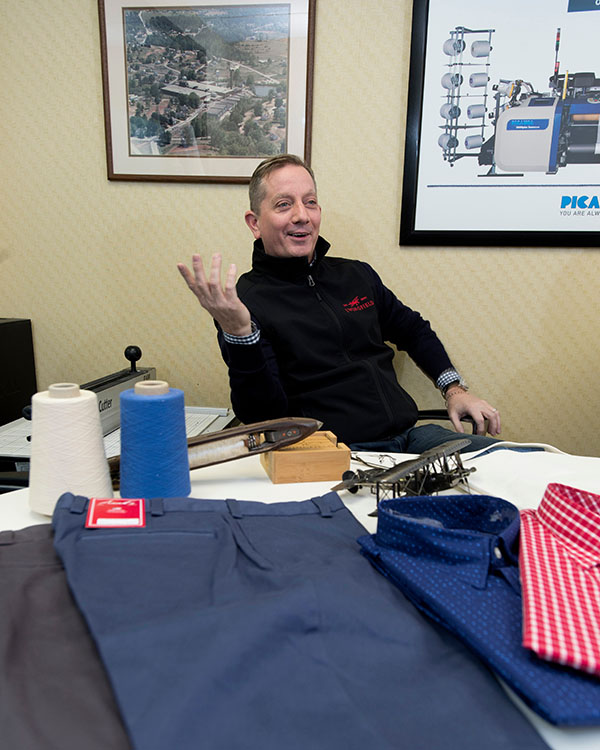 They are cut from the same cloth—three generations in the family business.

James McKinnon '87 is carrying on that legacy in the ever-changing world of textile production as CEO of Cotswold Industries. His grandfather founded the company in 1954. Then his dad, Wink '60, followed suit. In 2009, it was James's turn.

"My dad said, 'A family business needs family,'" says the younger McKinnon, who had previously worked in management consulting and for an executive search firm.

While the principles and hard work remain the same, the business model has evolved over the generations.

"As trade deals changed the nature of how American manufacturing fit into global commerce, it remains an incredible challenge to figure out how to keep an old-line American company relevant and profitable," McKinnon says.

The answer was for the New York City-based company to eschew the default supply chain of the clothing industry.

Key to the company's blueprint for success are its two new clothing lines, J Wingfield, a dressier label launched in 2015 that skews toward young professionals, and Frank's, a casual wear line launched in 2017 that is geared toward older customers. About 100 stores carry the company's two brands, which can also be ordered online and through third-party e-commerce sites such as Amazon.

Cotswold Industries gets the cotton for its flagship labels from Mississippi and Alabama. It's then spun and woven at factories in Georgia and South Carolina. Finally, it's cut and sewn into clothing in Virginia and Texas.

"We call it dirt to shirt," McKinnon says. "'Made in the U.S.A.' has become more of a buzzword as China has become expensive and exceedingly dirty and as the world becomes more aware of carbon footprints."

In addition to its own labels, Cotswold Industries counts Levi's, Wrangler, and Abercrombie & Fitch as major accounts for its fabrics. They make pockets, waistbands, corduroy, everything except for underwear and socks. Everything. Not just clothes, either. The company produces textiles for wallpapers, circuit boards, and fabrics for the car industry, the military, and for health care.

"We are on an adventure to bring quality made-in-the-U.S.A. products back and to do so in a way that's affordable, has a positive impact on the environment, and is done in a sustainable way," he says.

It hasn't been easy for McKinnon, who is married with two children and lives in Rye, New York. "Our bank went bankrupt. That was a big problem," he says. "We had to refinance in the middle of Bear Stearns and Lehman Brothers going out of business. It was certainly a trying moment, not just for us but the entire country. You look back on it and say, 'If it didn't kill you, it made you stronger.'"

Another example of the company keeping up with the times was the launch of its made-to-measure service just in time for Cyber Monday.

"Choose your fabric. Tell us what you would like, and we'll make it for you personally," McKinnon says. "A lot of the market is not exactly mediums or large." And in business, one size doesn't fit all.

Neil Vigdor '95 is the statewide political writer for Hearst Connecticut Media, which publishes eight daily newspapers and 13 weeklies in the state and Connecticut Magazine.

Minding the Business
How to Work Smarter, Not Harder
Powered by Finalsite