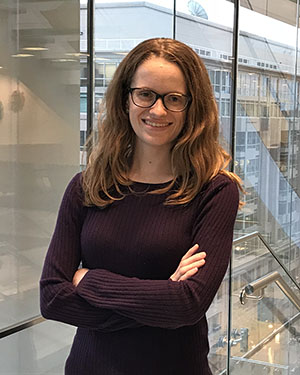 In her work as a staff writer for Stateline.org, a news service affiliated with the Pew Charitable Trusts, Sophie Quinton ’06 truly takes the adage “all politics is local” to heart.

“Stateline was started to address the shrinking of local news coverage and reporting on statehouse policy,” she explains. “There was a need for deep, fact-based reporting on trends at the state and local level.” So, instead of tracking the news out of Washington, Quinton uncovers stories in a number of smaller communities throughout the United States.

Passionate about writing from childhood, Quinton didn’t always know that her hobby would become a career. “I’ve always loved reading and analyzing texts and putting sentences together, but journalism wasn’t really on my radar when I was younger,” she says. It wasn’t until she was preparing to graduate from Yale, where she earned a degree in English, that she began to consider a job at a news publication. One position immediately grabbed her attention: a fellowship with Washington, D.C.’s National Journal. “I remember thinking, ‘I have to get this,’” she says. Looking back on her first job out of college, Quinton says she discovered the thrill of journalism and tried her hand at a number of different beats. “I pick up things quite quickly and am fairly versatile,” she says, “so I gained a reputation as someone who could get moved around and dropped into a new beat and still do a good job.”

While at National Journal, Quinton worked on both the “Next Economy” series, which followed economic trends at the local and even nongovernmental levels, and the “Next America” series, which focused on the effects of demographic change on the country. These projects especially prepared Quinton for her current role at Stateline.

“I was writing feature stories that had a greater focus on state and local issues than the typical Washington reporter,” she explains, “and I made a niche for myself. Now I’m doing that on a much larger scale.”

Quinton joined Stateline in 2015, and while, broadly speaking, she is an economics reporter, she admits, “‘the economy’ can mean pretty much anything, so I end up writing about a wide range of topics. I work on an ongoing series about wildfires and what they mean for budgets. I’ve written about marijuana legalization and what that means for state regulators, and I’ve done a number of stories about higher education and workforce issues.”

It’s a beat that allows her to “really get to see how different issues are playing out across the country” and takes her around the nation following leads. “It’s been so interesting to go places that I would never have gone to otherwise,” she says. “I did a story about a community college program that brought me to Jackson, Mississippi, and I looked at job training and migration in Eastern Kentucky.” Last summer, Quinton permanently relocated to Colorado to undertake a new position as a regional reporter covering issues facing communities in the Rocky Mountains and on the West Coast.

In addition to her regular presence on Stateline.org, Quinton’s work has been republished in the Washington Post, Chicago Tribune, Huffington Post, and USA Today, among many other news outlets. For her, the opportunity to help a broad audience understand the issues facing regional communities is especially meaningful: “It’s been very rewarding to go to places the national media doesn’t often see and to learn how things are playing out and tell the story of what life is really like there.” j