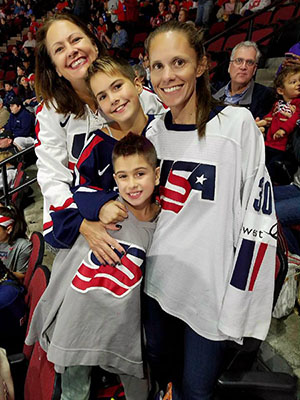 Former Olympic Hockey player Chanda Gunn ’99 has faced some major hurdles both on and off the ice. The star goalie won the 2003–04 Hockey East Player of the Year Award as a Northeastern University Husky, then led Team USA to a World Championship in 2005 and an Olympic Bronze Medal in Turin in 2006. And she achieved all this while battling epilepsy.

Diagnosed at the age of 9, Gunn has struggled with epilepsy most of her life, but she’s never let it prevent her from pursuing her dreams. Instead she used her struggle to her advantage, turning a substantial obstacle into a passionate and fulfilling career.

Gunn’s official titles are New Hampshire field services manager and youth programming specialist, but she’s most proud of her work spearheading the Young Leaders Network, a program she designed for epileptic youths seeking to help others with epilepsy in their communities. Gunn started the Young Leaders Network in January 2017 with only five participants. Today, more than 300 youths across six U.S. cities are involved. Its 12 core programs aid a range of abilities and ages, and offer services from career support to summer camps.

Gunn’s passion lies not only in helping those suffering from epilepsy, but in raising awareness of the disease, which affects 3.4 million people in the U.S. Her own struggle with epilepsy has not been easy, but with medication and a low-carb ketogenic diet her seizures are mostly under control. An inspiration to many, Gunn is living proof that having epilepsy doesn’t (and shouldn’t) define you. Her goal is to instill this sense of hope in others, encouraging the epileptic community not to let the condition prevent them from chasing their dreams.

Of her Olympic experience Gunn says, “At the end of the day, the most rewarding part of bringing home my medal has been the ability to share it with others, and the platform the Olympics gave me to be an advocate for epilepsy.”

Now famous for her support of the cause, Gunn travels around the country to speak at various epilepsy foundations such as NYU’s FACES (Finding a Cure for Epilepsy and Seizures), and hosts events and fundraisers to raise awareness and education. One notable recent event was Slap Out Epilepsy, a hockey clinic Gunn organized where youths got an exciting opportunity to skate alongside NHL stars including New York Ranger Chris Kreider, whose cousin suffers from epilepsy.

Gunn credits Taft for giving her a more well-rounded perspective that motivated her to succeed both on and off the ice.

“I came to Taft as a PG hockey recruit,” she says. “Before, hockey had always dominated my entire being, but at Taft there was an emphasis on the importance of well-roundedness, and that had a real impact on me. I’d always been pigeonholed as a hockey player—and I did love hockey—but I realized I was also someone who liked to work really hard in other areas. Taft taught me that I didn’t have to identify with just one thing.”

Gunn has fond memories of her time on the ice, but with two children and a fulltime job, she rarely has time to skate these days. But Gunn says she doesn’t miss hockey all that much—her family and epilepsy advocacy work keep her heart very full.

“Epilepsy is still a disease that’s very much in the shadows,” explains Gunn’s wife, Susan Linn, CEO and president of the Epilepsy Foundation New England. “But we’re working to change that. I’m so proud of all Chanda has done with the Young Leaders Network. It’s growing so quickly, and we’re on track to share this model throughout the country in the near future.” j