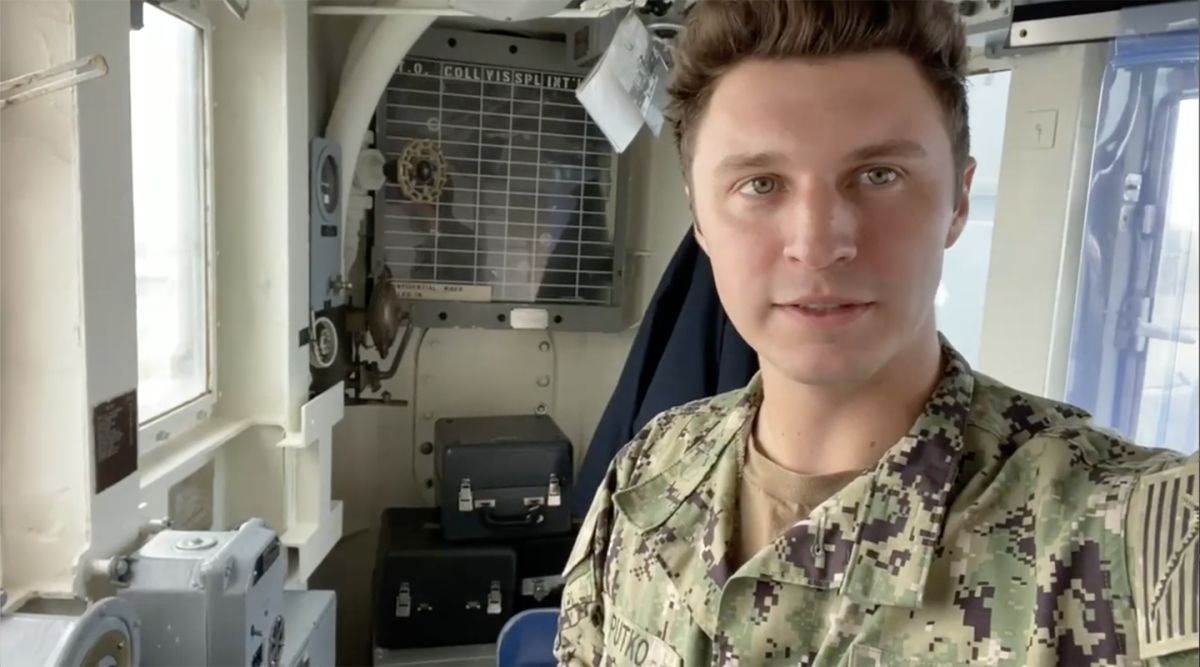 U.S. Navy Ensign Jimmy Putko ’15 delivered a pre-recorded Morning Meeting talk on Veterans Day from his post aboard the USS Port Royal, a warship currently based in Pearl Harbor, Oahu, Hawaii. The Port Royal was Ens. Putko’s home during a nine-month deployment to the Persian Gulf.

“I really feel it is very similar to a community like Taft,” said Ens. Putko. “There are 400 people aboard the ship—everyone has to do their job, and everyone fulfills their role. If everyone is nice to each other and does their job, you’ll complete your mission.”

Ens. Putko shared video highlights from his time in the Persian Gulf, where he and his shipmates served as part of a multinational coalition working to secure the high seas. Utilizing Visit, Board, Search and Seizure (VBSS) Teams, the Port Royal crew was able to interdict illegal narcotics valued at more than $22 million dollars; escort dozens of military and civilian vessels to ensure safe travels; and serve as a barrier against potential enemy forces.

“It was very fulfilling to have completed that mission and maintain a presence in the Persian Gulf,” Ens. Putko noted. “What I learned about the Surface Navy is that its main mission is presence. In wartime or peacetime, the Surface Navy is on constant patrol—Christmas Day, Thanksgiving Day—people are deployed all over the world. Even when we’re in port there is a constant presence on board the ship in the event that we need to get underway on short notice.”

Ens. Putko graduated from Cornell University, where he studied at the Cornell Dyson School of Applied Economics & Management, played soccer, and was part of the ROTC program. He was commissioned in May of 2019. Aboard the Port Royal, he serves as officer of the deck.

“I am driving the ship—not on the wheel, but in the pilot house managing casualty controls, managing personnel, and navigating where we need to go next.”

The Port Royal is scheduled for deployment again in early 2022. The crew is training for that deployment now.

“The most beautiful thing about being in the military is that it is the most diverse institution in America,” said Ens. Putko. “It is an honor and a privilege to serve on board this ship with this crew.”