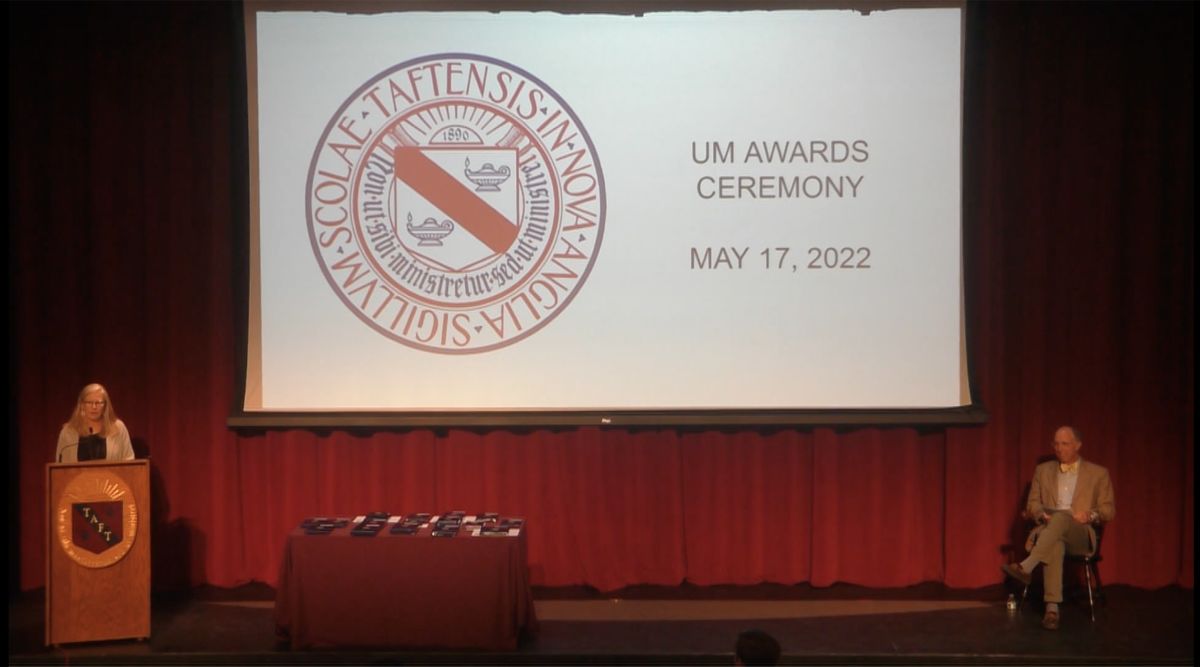 “Today is a celebration of tremendous effort and learning,” noted Assistant Head of School Jeremy LaCasse in kicking off this year’s Upper Mid Award Ceremony. “While we recognize a few, this day also speaks to the accomplishments of all. We should each feel proud of what we’ve accomplished.”

Those honored during the ceremony, available to watch here, are:

The following students took the 2021 PSAT; their performances show outstanding academic potential. From more than 1.3 million program entrants, each of these students is among the 50,000 highest scoring participants who will receive recognition in the 2023 National Merit Scholarship Program as either Semifinalists or Commended Students in the fall:

This annual award goes to Upper Middlers who have contributed significantly through their volunteer service in the community. Congratulations to:

Rollin Osterweis was a brilliant Taft student who went on to a distinguished career as a professor of American oratory at Yale, where among others, he taught George W. Bush and John Kerry. The Rollin G. Osterweis ’25 Debate Prize is given at the discretion of the Head of School to recognize that student whose dedication, passion, and ability in debate best embodies the legacy of Rollin G. Osterweis. The award goes to:

Science: The Science Olympiad team finished 15th overall this year, with a first place in Wright Stuff for Eli Juvan and Kevin Lian, and a second place in Trajectory for Brendan Staines and Alex DiCorpo.

The following are the 2022 inductees into the Spanish Honor Society:

The following students were honored for their achievements on the National Latin Exam:

THE UNIVERSITY OF ROCHESTER BAUSCH AND LOMB HONORARY SCIENCE AWARD

This award is presented by the Bausch and Lomb Company to that member of the Upper Middle Class who has been outstanding in their work in science. The recipient this year is:

Presented to that Upper Middler who best combines a high degree of ability in English expression, both written and spoken, with those outstanding personal qualities which, in the words of the Brown Charter of 1764, give promise that the student will become one of the succession of men and women duly qualified for discharging the offices of life with usefulness and reputation. The award goes to:

Given to an Upper Middler for excellence in mathematics and sciences. This year the award goes to:

UNIVERSITY OF ROCHESTER FREDERICK DOUGLASS AND SUSAN B. ANTHONY AWARD

This award is presented to that member of the Upper Middle Class who has demonstrated commitment to understanding and addressing difficult social issues; leadership and dedication to community action; strong grades; and rigorous courses taken in the humanities and social sciences. This year the award goes to:

This award is given by the Head of School, to that Upper Middler who has distinguished themself in creating a close and diverse global community. The award goes to:

The Feidelson Award is given annually to a rising Taft Senior who has shown great strength of character, acts quietly as a mentor in the Taft community, and sets an example of civility and leadership for others in the dormitories, on the playing fields, or in the classroom. The award goes to:

THE UNIVERSITY OF CHICAGO BOOK AWARD

The University of Chicago Book Award is given to that student whose challenging coursework, intellectual engagement in and out of the classroom, ability to draw connections across academic disciplines, and commitment to the community to mark him or her unique. The award goes to:

Presented to an Upper Middler who has demonstrated intellectual leadership and made a positive contribution to the extracurricular life of the school. This year’s recipient is:

Awarded to that student in the next‑to‑last year of college preparatory courses whom the Head of School, after consulting with the faculty, shall deem most worthy by result of high scholarship and character. The award goes to:

The Award recognizes a high school junior who has demonstrated extraordinary service to the common good, and an unusual passion for inquiry, discovery, and innovative thinking.

Awarded to a member of the Upper Middle Class whose high honor roll standing and commitment to learning exceeds classroom requirements. This student’s good character is evident in community service activities and outstanding contributions to the extra-curricular life of the school. The award goes to:

Presented to an outstanding Upper Middler who exemplifies the academic achievement, leadership qualities, and concern for others that characterize the thousands of women who have graduated from Smith College. This year, the award is presented to:

The Jefferson Book Award Program was established to recognize outstanding high school students during their Upper Middle year. The award is presented to the Upper Middler whom the high school considers to best represent the Jeffersonian ideals of scholarship, leadership and citizenship. The award goes to: