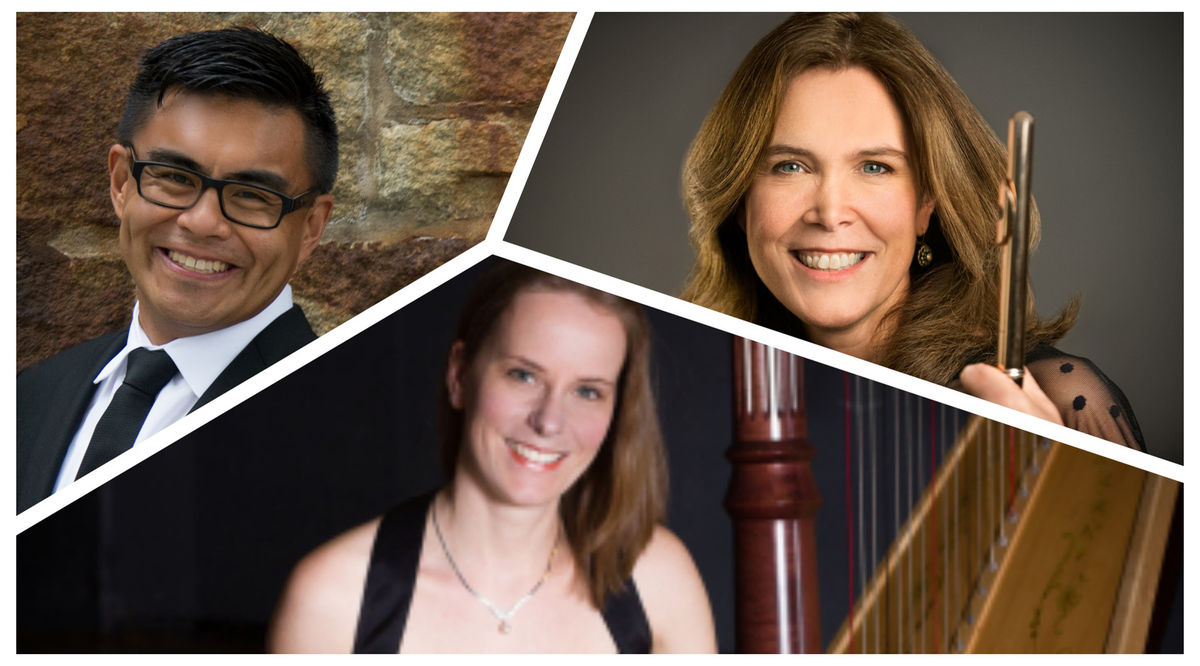 Taft's Music for a While concert series continues Friday, February 28, with an evening of classical chamber music for flute, viola, and harp, featuring Trichrome. The program begins at 7 pm in Walker Hall, 50 DeForest Street. The event is free and open to the public. Tickets are not required.

Trichrome blends the musical talents of Taft alumna and flautist Vanessa Holroyd, harpist Franziska Huhn, and violist Daniel Doña. While the three played together for many years with various larger ensembles, they first performed as a dedicated trio in 2017 at the invitation of Beau Kenyon, then composer-in-residence at the Boston Public Library. Since then, they have performed at a number of prestigious events and venues, including the Boston Athenaeum for Emmanuel Music, and Boston University. This summer they will perform during Franziska's Faculty Recital at the Boston University Tanglewood Institute.

Vanessa Holroyd (Taft '90) frequently performs as principal flute with the Orchestra of Emmanuel Music; she also enjoys an active schedule as a freelance performer, notably in the chamber music sector. Early in her professional career, Holroyd was a top prizewinner in the National Flute Association's Young Artist Competition, where her performance was recognized with the award for the best performance of a newly commissioned work. Recent collaborations include performances with the Isabella Gardner Museum's Isabella Ensemble, the Arneis Quartet, the Kraft Ensemble, and the Grammy-nominated string ensemble, A Far Cry. She has performed in chamber music concerts presented by the Rockport Chamber Music Festival, Emmanuel Music, Steinert & Sons, Rochester (VT) Chamber Music Society and Winsor Music, in addition to recitals throughout the US and British Virgin Islands. For ten years, Vanessa was a member of Arcadian Winds, a Boston-based woodwind quintet specializing in contemporary music.

Harpist Franziska Huhn is a vibrant musical force as a soloist, chamber musician, pedagogue, and orchestral performer. She has delighted audiences across the globe, including German Presidents Johannes Rau and Horst Koehler in performances at Schloss Bellevue. Huhn established herself as an artist of distinction at a very young age, earning first prize in the prestigious Jugend Musiziert Competition in Germany at the age of fourteen. She was then invited to study on a full scholarship with Lucile Lawrence at Boston University. Huhn continued her studies at New England Conservatory, where she became the first harpist ever to be awarded their Artist Diploma. Huhn is known as a proponent of contemporary music for harp and performs works written especially for her by composers Daniel Pinkham, Lior Navok, and John Heiss.  As a pedagogue, she holds faculty positions at New England Conservatory, Boston University, Longy School of Music of Bard College, and Wheaton College. Since 2003, Ms. Huhn has been the Assistant Director of the Harp Seminar at Boston University's Tanglewood Institute. She has served on the faculty of the Connecticut Valley Harp Intensive since 2012.

Violist Daniel Doña has distinguished himself as an active performer and pedagogue. He serves on the viola faculty of the Boston University School of Music alongside his duties as Chair of Student Life and Honors, Assistant Chair of the String Department, Coordinator of String Chamber Music, and Lecturer of String Pedagogy and String Literature. He is also Assistant Director of the Boston University Tanglewood Institute String Quartet Workshop and has taught at the Apple Hill Center for Chamber Music and Point CounterPoint. In addition to his teaching at BU, Dr. Doña serves on the faculty of the Boston Youth Symphony Orchestra Intensive Community Program. Performance highlights include appearances at the Beijing Modern Music Festival, Music on Main (Vancouver) and Stanford University's Lively Arts series as well as broadcasts on CBC Radio 2, WGBH and WCLV. Daniel performs regularly with Emmanuel Music and other ensembles in the Boston area. He has presented guest masterclasses at the University of Connecticut, Swarthmore College, Northwestern University Music Academy and Miami University.  His arrangement of Queen's Bohemian Rhapsody for viola ensemble has been performed internationally.

For more information visit taftschool.org/concerts or call the box office at 860-945-7898.