Fourteen student-athletes across seven sports participated in the second of three National Signing Days Wednesday evening, February 1, in Bingham Auditorium. The ceremony celebrates those students making commitments to continue their academic and athletic careers at the college or university level. Coaches, families, teammates, and the full Taft School community were invited to the event. Individual photos of each student-athlete can be found on our Instagram and Facebook pages.

Since 1964 the National Collegiate Athletic Association (NCAA) has recognized commitments between student athletes and Division I and II athletics programs using through their National Letter of Intent (NLI) program. The program now includes 676 Division I and II participating institutions. 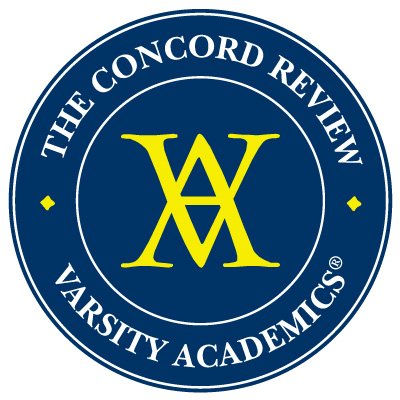 Taft Senior Stephen Cho is now a published author. Cho was notified in early December that his essay on the origins of the temperance movement would be included in the winter issue of The Concord Review, a highly regarded academic journal, which recognizes and publishes exemplary history essays by high school students. Cho's essay was one of 10 selected for publication from a submission field of more than 1,000.

The seeds of Cho's work were sown last year in Jon Willson's AP US History class, where, Cho says, students developed 2,000 word essays on social progress in the 19th Century.

"I knew about the prohibition movement in the 1920s, but wanted to understand more about its origins," Cho explains. "I wanted to dive into that a little more by going back to examine societal views on alcohol during the prior century."

It was only after Cho had completed his class essay that he learned about The Concord Review. He asked Willson to help him grow the piece for submission to the journal.

"Stephen is a clear and concise writer, and he's intensely interested in all aspects of history," says Willson. "So when he expressed an interest in slightly editing his fall research paper on the temperance movement in order to prepare it for submission to The Concord Review, I was happy to help. By the time he sent it, I thought it had a chance—still, I know how many papers they receive."

The "slight editing" required Cho to double the length of his paper to meet the journal's submission standards. He spent more than a month doing just that, expanding his source base and digging deeper into specific aspects of the movement. It was during that process that Cho became even more interested in the role of women in impacting social change. 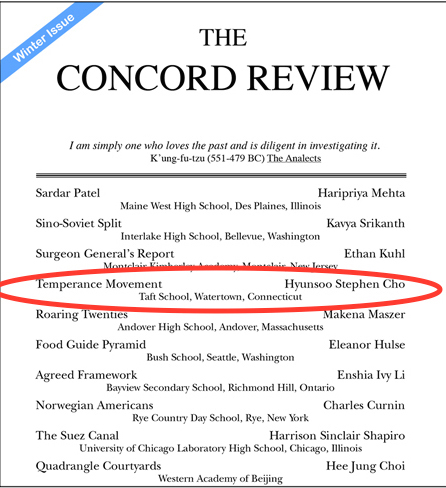 "Women were so involved in the movement in a way that formed a basis for much of what they were able to achieve later," Cho says. "The right to vote, changes in social status, and their changing role in society all have roots in the temperance movement."

In his submission Cho writes, "Since women suffered the most from men's abuse of alcohol, women wanted to end male dominance in marital relationships and saw in temperance the first step towards greater social standing for women. It is no accident that women's suffrage was ratified directly after the Prohibition Amendment, as women's suffrage and temperance were closely intertwined...Although the temperance movement ultimately failed, it forever changed American history. The movement stigmatized any reckless use of addictive substances, and more important, it set the foundation for the women's rights movement that even today fights for an America that truly believes that all humans are created equal."

Inclusion in The Concord Review is widely regarded as a significant academic achievement and high honor. The New York Times has reported that William R. Fitzsimmons, Harvard's dean of admissions, said he keeps a few issues in his Cambridge office to inspire applicants. Harvard considers it "something that's impressive," the Times says, like winning a national math competition. The Review, itself, refers to their work as "varsity academics."

"Maybe the best part is that Stephen is such a good guy," adds Willson. "He is deeply respected, admired, and just plain liked by the entire senior class. So it's a great honor, and it couldn't have happened to a nicer young man."

The Concord Review, Inc., was founded in March 1987 to recognize and to publish exemplary history essays by high school students in the English-speaking world. Published authors hail from 44 states and more than 40 countries. The Concord Review remains the only quarterly journal in the world to publish the academic history papers of secondary students. Learn more at tcr.org.