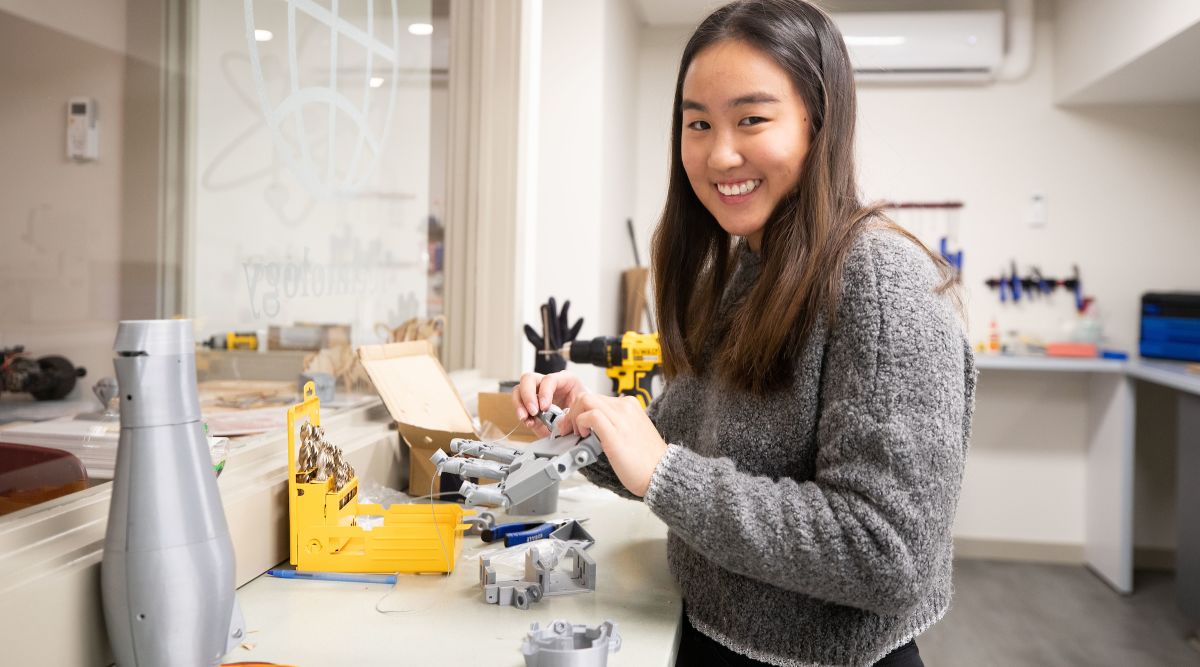 "I have always loved interdisciplinary topics that connect multiple subjects, mimicking the interconnected nature of our society," says Muffin Prakittiphoom '21.

It seemed natural, then, that Muffin's Independent Tutorial (IT) should reflect that passion for connection: Muffin has developed a prosthetic arm connecting, she says, engineering, medicine, and entrepreneurship.

While looking for ways to apply her skills and interest in robotics to service-type initiatives, Muffin came across the story of a teen who had built an arm out of Legos.

"I was immediately fascinated by the idea of designing and building prosthetics," says Muffin who, after experimenting with things like Legos, pipes, and wooden pallets, soon had a rough design for a prosthetic arm of her own. That design, coupled with her strong academic background in STEM at Taft, helped Muffin secure internships, first in the prosthetics and orthotics department at the Police General Hospital in Bangkok, Thailand, then at the Sirindhorn School of Prosthetics and Orthotics, the largest prosthetic provider in Thailand.

"I was introduced to 'professional' prosthetics at Police General Hospital. I applied the theory I learned in the field to my design and implemented existing control techniques," Muffin explains. "The following summer, I interned at the Sirindhorn School of Prosthetics and Orthotics, where I shadowed surgeons, prosthetists, and technicians throughout the prosthetics development process. At the same time, I was also able to receive guidance from professors at the affiliated university (Mahidol University) on my own project, while observing the process of publishing an academic journal."

Muffin's vision was to create an affordable, functional alternative to high-priced cosmetic arms most readily available to patients. With affordability, accessibility, and functionality as the foundational principles driving her work, Muffin produced a 3-dimensional-printed arm with six degrees of motion—five fingers and a rotating wrist. It is controlled by electromyography sensors connected to the user's remaining limb, which detect electrical activity in the muscle. Her work is far from done.

"The next step I envision for the project is to mass-produce the hand on a small scale, by making the design more modular and interchangeable, allowing me to quickly customize for each patient," Muffin explains. "I would also like to reduce the weight and cost of the arm by streamlining processes in the design, and add more sensors to the arm."

Adding a force sensor in the fingertip will help users detect pressure, temperature sensors detect changes in heat and cooling, and accelerometers will allow users to sense orientation.

"In the distant future, I also hope to incorporate emerging technologies in soft robots, to mimic the flexible properties of human anatomy."

And while clinical setting regulations and connections with doctors and some patients posed challenges for Muffin in her work, she was able to connect with amputees who were eager to test her prosthetic arm outside of a clinical setting, while providing valuable insight and feedback.

"This was also the most rewarding aspect of my work," says Muffin, "seeing the smiles on their faces as they opened a jar on their own for the first time, or hammered a nail. On the side, I have also been making hands for children with Leprosy/Hansen's disease, while far simpler, the outcome was equally, if not more, rewarding."

Muffin notes that her work has been entirely "self-led and facilitated," with invaluable support and guidance from others, including her IT advisor, Taft Science Teacher Dan Calore.

"Muffin was incredibly thoughtful in her approach and did a lot of research about what would make the prosthetic hand successful," says Calore. "She was incredibly committed to the project, and worked hard to find connections that could help her develop the project to the next level and to offer critical feedback. Ultimately, it was her attention to every detail on the project that led to its success."