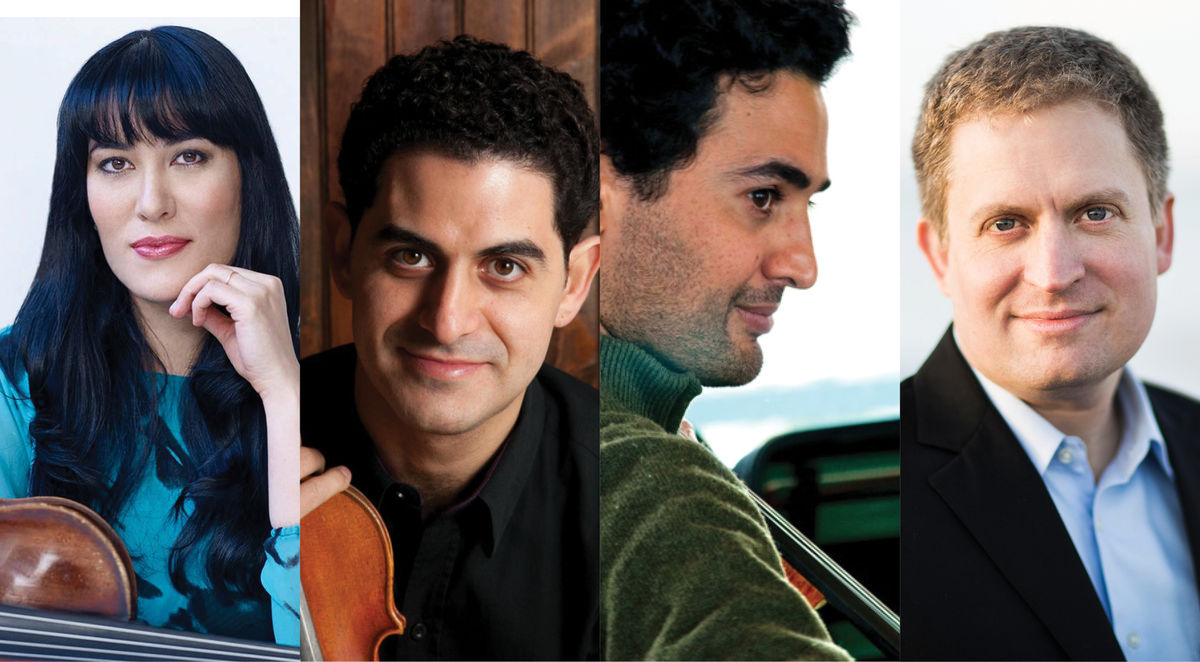 Four renowned musicians will join together in a tour de force performance in Taft School's Woodward Chapel Sunday, January 27 at 4 pm. Pianist Andrew Armstrong, Cellist Raman Ramakrishnan, Violinist Arnaud Sussmann and Violist Melissa Reardon will perform Piano Quartet No. 1 in G minor, Op 25by Johannes Brahms. The concert is free and open to the public. Tickets are not required.

Praised by critics for his passionate expression and dazzling technique, pianist Andrew Armstrong has delighted audiences across Asia, Europe, Latin America, Canada, and the United States through performances at Alice Tully Hall, Carnegie Hall, the Kennedy Center, the Grand Hall of the Moscow Conservatory, and Warsaw's National Philharmonic. Andrew's orchestral engagements across the globe feature a sprawling repertoire of more than 50 concertos with orchestra. He has performed with such conductors as Peter Oundjian, Itzhak Perlman, Günther Herbig, and Stanislaw Skrowaczewski, and has appeared in solo recitals in chamber music concerts with the Elias, Alexander, American, and Manhattan String Quartets, and also as a member of the Caramoor Virtuosi, Boston Chamber Music Society, Seattle Chamber Music Society,  and the Jupiter Symphony Chamber Players.

Cellist Raman Ramakrishnan was a founding member of the Daedalus Quartet, winners of the grand prize at the 2001 Banff International String Quartet Competition. The quartet has been in residence at the Chamber Music Society of Lincoln Center, the University of Pennsylvania, and Columbia University, where Mr. Ramakrishnan maintains a teaching studio. In 2011, he formed the Horszowski Trio with violinist Jesse Mills and pianist Rieko Aizawa. He has given solo recitals in New York, Boston, Seattle and Washington, D.C., and has performed chamber music at Caramoor, at Bargemusic, with the Boston Chamber Music Society, and at the Aspen, Charlottesville, Four Seasons, Lincolnshire (UK), Marlboro, Mehli Mehta (India), Oklahoma Mozart and Vail Music Festivals. As a guest member of Yo-Yo Ma's Silk Road Ensemble, he has performed in New Delhi and Agra, India, and in Cairo, Egypt.

Ramakrishnan is married to Grammy-nominated violist Melissa Reardon, who will also be featured in the January 27 concert. Reardon is a versatile performer whose playing spans all genres of the viola literature. She was a First Prize Winner of the Washington International Competition, and the only violist to win top prizes in consecutive HAMS International Viola Competitions. She received the prize for "best performance of a newly commissioned piece" at HAMS in 2006 as well the Tourjee Award in 2002. Reardon has performed as soloist with Camerata Notturna, the Boston Symphony and, most recently, the East Carolina Symphony. She is also a founding member of the East Coast Chamber Orchestra (ECCO) and a sought-after collaborative musician. Reardon has appeared in numerous festivals across the US, Europe, India and Korea, including Music in the Vineyards, Chamber Music Northwest, and the Bridgehampton, Charlottesville, and Sangat (Mumbai) Chamber Music Festivals. She has also toured with Yo-Yo Ma's Silk Road Ensemble and with Musicians from Marlboro, which brought her across the US and to France.

Winner of a 2009 Avery Fisher Career Grant, Violinist Arnaud Sussmann has distinguished himself with his unique sound, bravura, and profound musicianship. A thrilling young musician capturing the attention of classical critics and audiences around the world, Sussmann has appeared with the American Symphony Orchestra, Buffalo Philharmonic, Chattanooga Symphony, New World Symphony, Pacific Symphony, Paris Chamber Orchestra, Jerusalem Symphony and the Vancouver Symphony Orchestra. Further concerto appearances have included a tour of Israel and concerts at Lincoln Center's Alice Tully Hall, Dresden Music Festival in Germany and at the Phillips Collection in Washington, D.C. He has also given concerts at the OK Mozart, Mainly Mozart and Moritzburg festivals and appears regularly at the Caramoor, Music@Menlo, La Jolla SummerFest, Seattle Chamber Music, Moab Music and Saratoga Springs Chamber Music festivals. A dedicated chamber musician, Sussmann has been a member of the Chamber Music Society of Lincoln Center since 2006 and has regularly appeared with them in New York and on tour, including a recent concert at London's Wigmore Hall.

Woodward Chapel is located at 25 The Green in Watertown, CT. The January 27 performance is part of Taft's Music for a While concert series. For more information, visit www.taftschool.org/concerts.

Angela Davis Johnson Opens in Potter Gallery
Two Shows at Taft: A Night at the Opera with Browner '12 and Guitar Magic
Lessons & Carols: Celebrating the Season
Powered by Finalsite