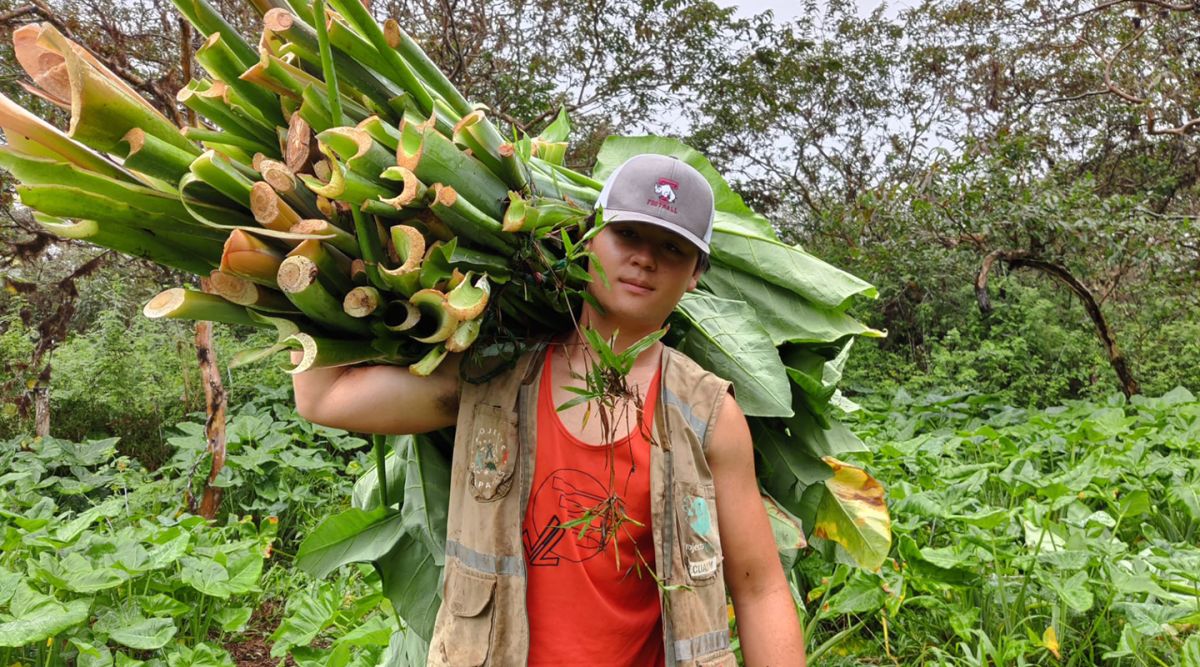 A few years ago, Khai Shulman '23 studied biodiversity in mangrove plants in the context of varying salinity levels at The Island School in the Bahamas. But what really captured his attention was something much greater.

"I saw how human-made trash from other parts of the world can end up in remote islands," says Khai, "which made me more aware of the interconnectedness of our environment."

It also prompted him to begin working to reduce waste—he created a composting program for residents of his building in New York City—and to seek out new opportunities to make a real impact on the environment. Over the summer and with support from Taft's William W. Hatfield '32 Grant, Khai traveled to the Galápagos Islands, where he engaged in hands-on conservation work designed to protect and preserve the famed Galápagos tortoises.

"From watching hours of nature shows with my parents and siblings over the years I formed a strong impression of the Islands," Khai says. "I wanted visit the place that inspired Charles Darwin in his game-changing research on evolution."

San Cristóbal Island is home to the oldest permanent settlement on the Galápagos Islands. It is also where Charles Darwin first went ashore in 1835. Today, sea lions, red-footed boobies, marine iguanas, and dolphins are among the creatures sharing the island with the giant Galápagos tortoises, whose ancestors arrived there two to three million years ago.

"The nature of our conservation work during the first week was to ensure that the unique ecosystem of the Galápagos Islands—and more importantly San Cristóbal—can thrive," Khai explains. "During the first week, we got a special permit to enter the Island of San Cristobal to care for the local tortoises by cleaning their spaces, feeding them special plants, and maintaining their walkways. The laws in the Galápagos do not allow people within two meters of the animals and totally forbid touching them. This made me understand how special our work with the tortoises was. Having access to them is a privilege that is not extended to tourists no matter how much they are willing to pay."

"It honestly baffles me how the trash ends up there because the rules are so strict. For example, when we enter the island, all bags are scanned and searched to make sure there was no food or single-use plastics, such as plastic cups and straws. And yet, during our clean up, we saw so much trash from building materials, food packaging, and other items," Khai notes.

During the second week of the program, Khai spent a portion of each day at San Cristóbal's Alejandro Alvear School teaching young students English, and the rules of soccer. They closed out each day by working on a wall mural close to another local school.

"The most impactful part of my experience was definitely interacting with the young students on the island" says Khai. "I discovered that each of the students, usually under the age of 10, had very strong work ethics, were down to earth, and had a great sense of humor. It was uplifting to see the progress the students made in my limited time with them. They are fast and enthusiastic learners!"

Inspired by both the mission and leadership of Projects Abroad, as well as the totality of his experience in the Galápagos Islands, Khai is hoping to share that inspiration with the Taft community through the creation of an International Film Club on campus this fall, featuring short films from a broad range of countries followed by thoughtful, film-driven conversation.

"The idea behind this program is to appreciate and recognize the different points of views in the world," Khai says, "because when humans on a fundamental level understand each other, we are more willing to put aside our differences and work towards a common goal. My hope is to bring people with different backgrounds and experiences together at a time when communities are so polarized and divided along political, racial and gender lines."

Established in 2010, this endowed fund was made possible through the generosity of Guy Hatfield '65, Ross Hatfield, and the ongoing support of William W. Hatfield's family. The grant celebrates the ideals of Horace Dutton Taft—service above self—and is given annually to one or more students whose commitment to volunteerism brings to life the message behind Taft's motto: Non ut sibi ministretur sed ut ministret—Not to be served but to serve.