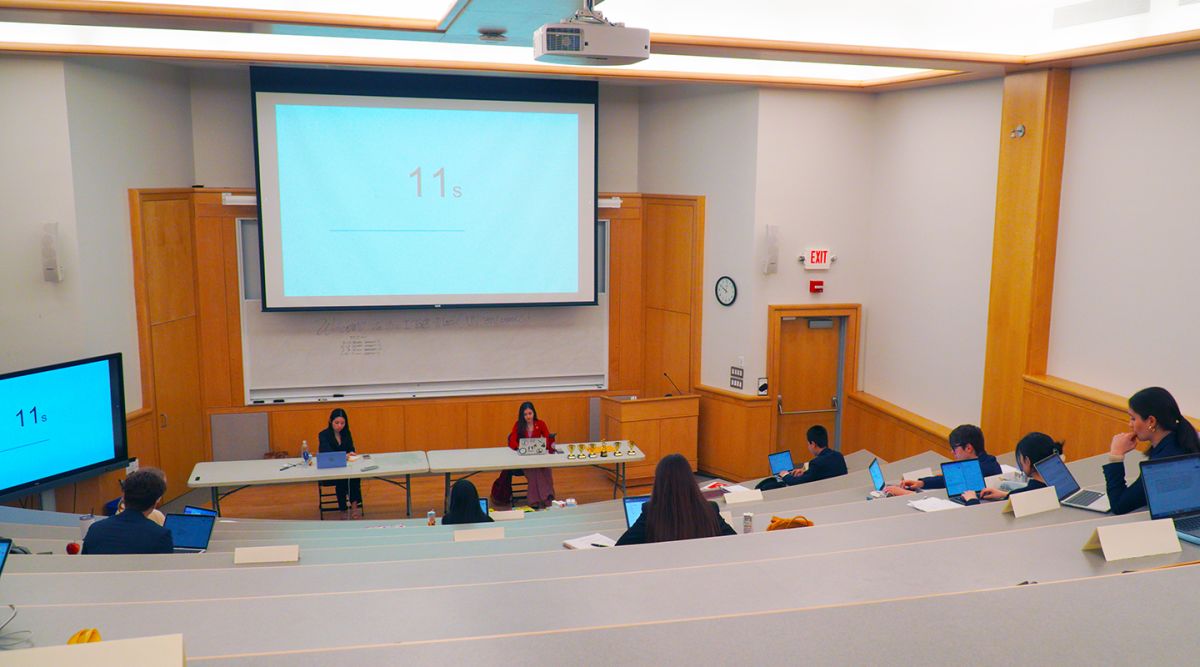 As a community of students hailing from 52 nations, Taft is a study in international relations, diplomacy, cultural exploration, and global celebration. Rina Kurihara '24 and Theresa Alves '24 believe that such diversity in culture and experience offers tremendous opportunities for deeper learning and understanding both in and out of the classroom. So when the pandemic brought curricular changes that paused Taft's Model United Nations (MUN) academic course, Rina and Theresa looked for ways to bring the MUN experience to Taft students. 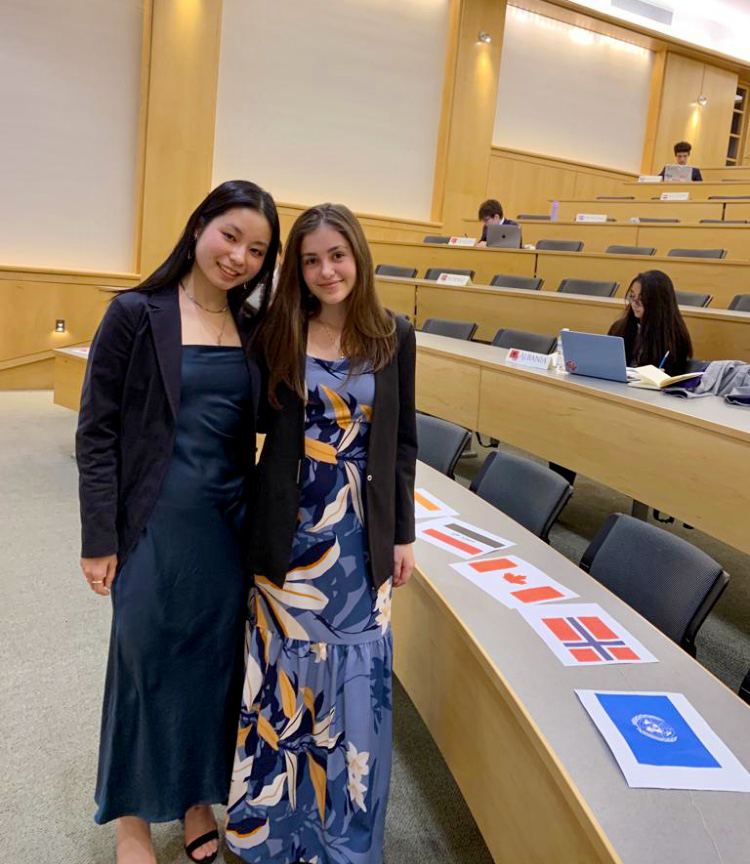 "There were many voices in our community expressing interest in participating in MUN," says Rina. "During the summer following my freshman year, I reached out to Taft alumni who had participated in MUN, and to members of our faculty. Through those conversations, I landed on the idea of bringing MUN back to Taft as a club—as a way to keep us engaged with the MUN culture."

MUN began as a series of student-led model League of Nations "international assemblies" at Oxford University in 1921. At MUN conferences today, each student delegate works as a representative of a country, organization, or person, to solve global problems with other delegates from around the world. These educational simulations allow students to learn about and practice diplomacy, international relations, and the United Nations, while developing research, public speaking, debating, writing, critical thinking, teamwork, and leadership skills.

When Rina announced that she'd be establishing a MUN club in the Fall of 2021, more than 60 students signed on; Theresa was among the first, and most enthusiastic. Now co-heads of the Taft Model United Nations Club, Rina and Theresa host bi-weekly meetings during which MUN members learn MUN policies, procedures, skills, and conference protocols. Members applied those skills at Yale University's annual MUN conference in January, where Theresa earned Outstanding Delegate recognition.

"Our experience at Yale MUN and several other conferences were positive and encouraging," notes Theresa. "So much so that we wanted to take on the challenge of hosting our own, in-house conference—Taft MUN 2022. It represented the culmination of our club's fruitful first year."

Designed as a "beginners" MUN with a focus on introducing the MUN conference concept, Taft MUN 2022 spanned two days in April, and reflected the significant and cooperative efforts of the community—Academic Dean Jennifer Kenerson helped with scheduling, club advisor and Global Studies and Service Department Head Will Shotwell offered encouragement and guidance, Mina Xiao '23 and Maggie Zeng '24 helped with PR and in preparing the table of points and motions, Taft's Debate Club Captain William Roberts '22 helped advance participation. Taft MUN also partnered with Taft Girl Up, a group dedicated to empowering women and girls on campus, in selecting conference content.

"The UN Security Council topic, International Intervention to Ensure Women's Human Rights, was suggested by the Girl Up Club," explains Rina. "It included sensitive topics such as female genital mutilation, sex trafficking, and funding for the protection of women and girls in areas at war across the world."

Theresa acted as the conference secretary, and was responsible for the committee mediation and organization, writing the topic guide, and being the dais for the duration of the conference. As the under-secretary-general, Rina advised delegates about the rules of MUN and organized attendance and position paper check-in spreadsheets.

"With so much support from countless faculty members and students at Taft, our inaugural event included 23 registered delegates, and successfully passed a United Nations Security Council draft resolution addressing International Intervention to Ensure Women's Human Rights," Theresa says. "All of the delegates' performances throughout the conference were impressive to us. When we first idealized the conference, as a beginner's conference, we thought they would constantly make procedural mistakes and take much longer to complete working papers and alliances. What we witnessed on over the course of the two days was, however, much different—it truly exceeded our expectations."

Rina agrees. "We can proudly say that we achieved our goal for this conference: to engage Taft students in the MUN culture and educate them on worldwide issues, while promoting peace and the work of the UN through cooperation and diplomacy."

The high level of achievement across the board made it difficult for Rina and Theresa to decide which delegates truly stood out. Congratulations to the following delegates, recognized for their "clear leadership, generosity with compromises for the international welfare, attitude, public speaking, and readiness to lead the writing process," during Taft MUN 2022: 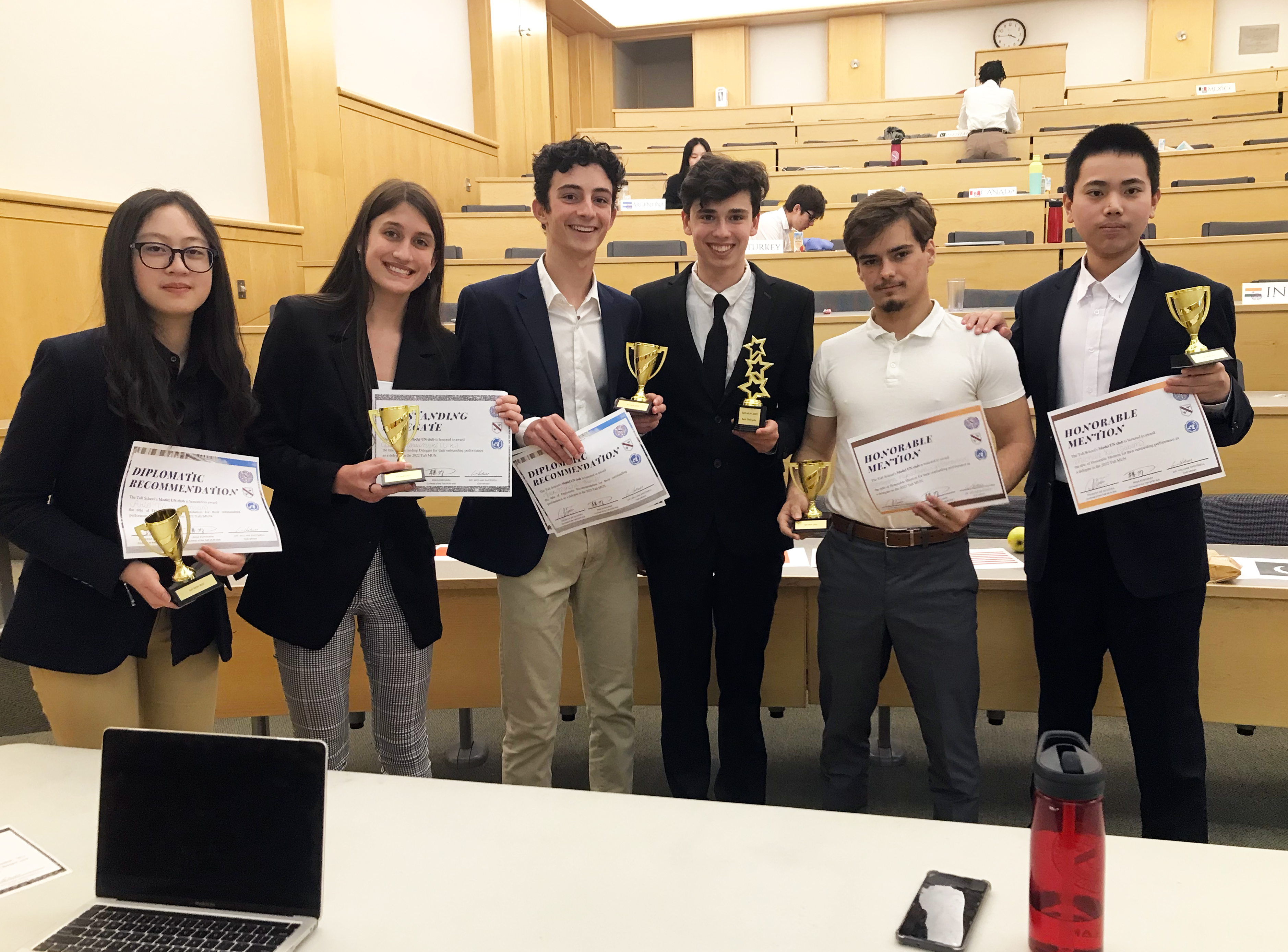 Taft MUN returns in the fall with bi-weekly meetings on Tuesdays at 2:45 in C130. All students are welcome to join, and to participate in Taft's second MUN conference, tentatively scheduled for late fall, 2022.

Photos with KG in the name courtesy Kevyn Gunawan '22, all others courtesy Rina and Theresa.