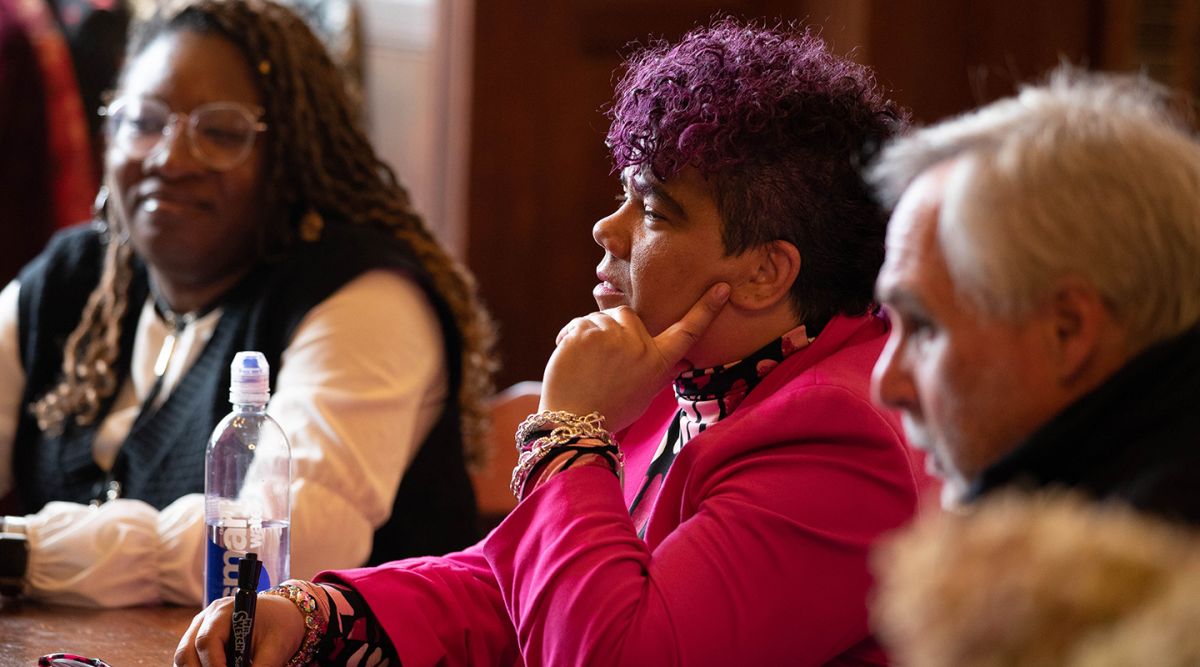 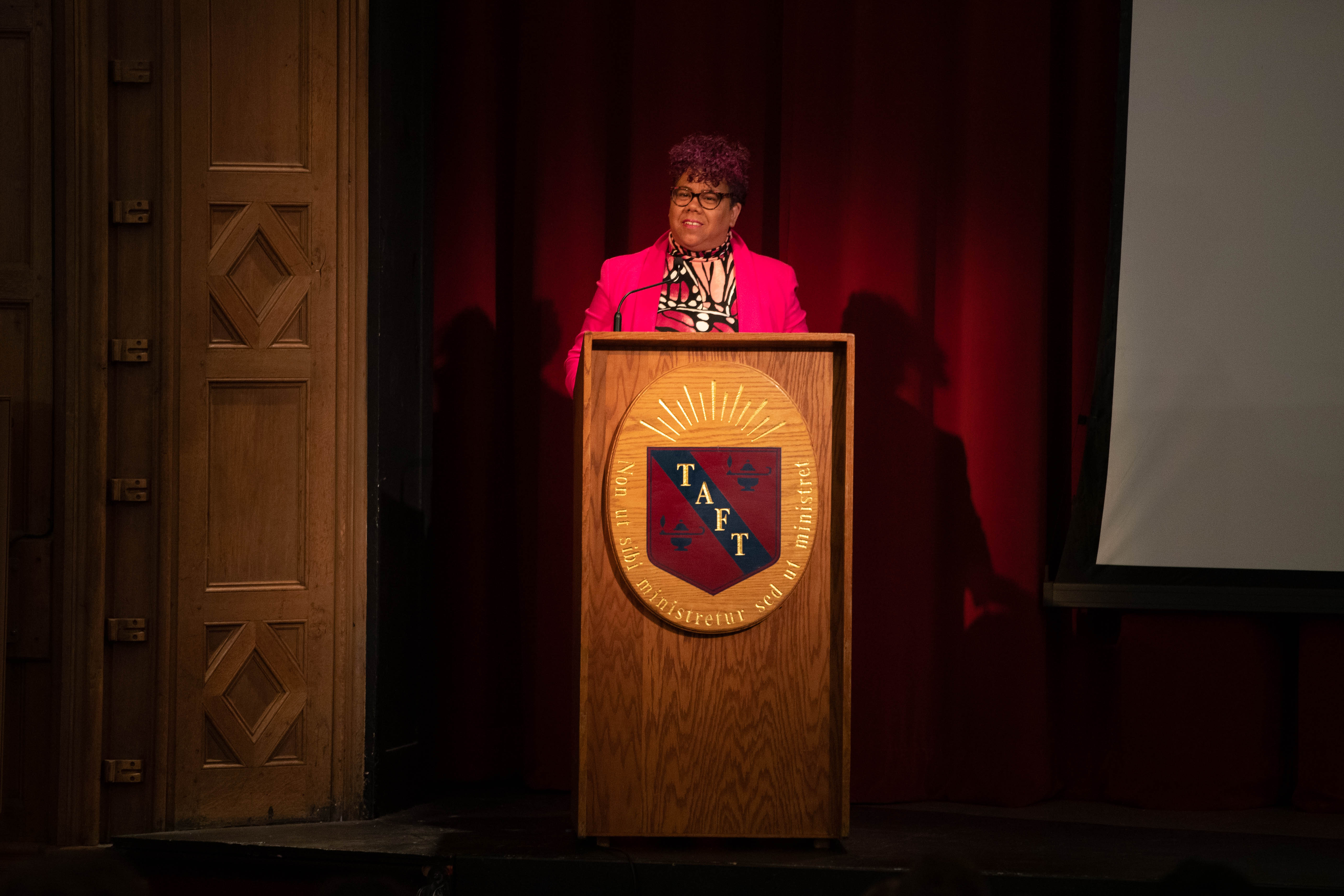 Before Women’s History Month Morning Meeting Speaker Rosa Clemente took the stage in Bingham Auditorium, members of the Taft community were introduced to her work through a video montage. It showed her at a rally in Ferguson, Missouri, following the 2014 killing of Michael Brown Jr. by a police officer; in conversation with activists, political leaders, and celebrities; and on the campaign trail as a 2008 U.S. vice-presidential candidate. It also showed her with renowned philosopher and social critic, Cornell West, who praised Clemente for “the fire in her soul.”

“Everybody has a story and mine begins in the South Bronx in 1972,” Clemente told Tafties in a talk centered on the origin and importance of the fire West spoke of. “I did not grow up in a what you would call a movement household. I did not grow up understanding politics, or studying history. But I had a great sense of pride in being Puerto Rican—my parents both instilled that in me.”

Clemente and her family eventually moved to Westchester County, New York. They were the first Latino family to move into the tiny village of Elmsford.

“I was born and partly raised in what is to this day the poorest Congressional District,” Clemente notes. “Then my mom moved me 19 miles away to Westchester County, the second richest suburb in the United States of America. I saw that I was very privileged to be in that public school. It was a community which for all intents and purposes was very utopic—white, black, we all got along. I don’t really ever remember dealing with racial issues. I would see negative images of black people on TV and think, that’s not what I’m experiencing.”

That all changed during Clemente’s first year at SUNY Albany where, within a month of her arrival on campus, a racial epithet was spray painted on a campus wall. And for the first time in her life, she was the target of an ethnic slur.

“I was really angry. I didn’t grow up with folks like this. I didn’t get it. So knew I had to find something that I could do, and that I really loved doing. I went to Black Studies classes, Puerto Rican studies classes, Feminist classes. I joined organizations, and by the time I was a junior I became president of the Albany State University Black Alliance. I knew then that I was going to have to be an organizer or a college professor or a teacher in a public school—I knew I wanted to be that type of educator.”

A turning point in Clemente’s life, she says, came when four Los Angeles police officers were initially acquitted in the beating of Rodney King (they were later convicted of federal charges). Within hours of the acquittals, Los Angeles residents took to the streets in a rebellion that lasted six days.

“For my generation, Rodney King is what George Floyd is to this generation. We saw it on television. The trial got moved, the cops were acquitted, LA rebelled,” Clemente recalls. “I had been reading about rebelling and Civil Rights, but I had not watched anything like that happen in our country. This was a defining moment for me; in that moment I committed myself to organizing against the conditions that allowed this to happen, and I have been an organizer and political journalist ever since.”

Central to all of her work and all of her experiences, Clemente notes, was the privilege of her education.

“All of these experiences and work as an organizer leads me to understand the importance of an education. I think what education should do for the most part is teach young people how to be thinkers, teach young people how to debate. I believe that students need to be exposed to many different ideas, so they can come to their own intellectual understanding of what they think and what they believe. I always tell young people, if you’re not part of a movement, join one. If you’re already in an organization make it stronger, and come up with the solutions we need at the intersections of all of our identities. Your politic—in terms of a radical or social politic--is something that is central to all of you and to any of the work you choose to do.”

Rosa Clemente is an award-winning organizer, speaker, political commentator, producer, independent journalist, scholar-activist and former Vice-Presidential candidate. A leading voice of her generation, the Bronx-born Black-Puerto Rican is frequently sought out for her insight and commentary on Afro-Latinx identity, Black and Latinx liberation movements, police violence, colonialism in Puerto Rico, hip-hop feminism, third-party politics and more. In 2008, Clemente made herstory when she became the first Afro-Latina to run for vice president of the United States on the Green Party ticket. She and her running mate, Cynthia McKinney, are to this date the only women of color ticket in U.S. presidential history. Since then, Clemente has continued to be a powerhouse. She is the creator of Know Thy Self Productions, under which she has organized multiple national tours; PR on the Map, an independent, unapologetic, Afro-Latinx-centered media collective founded in the aftermath of Hurricane Maria; and the Black Diasporic Organizing Project, a nonprofit dedicated to combating anti-Blackness within the wider Latinx community. Recently, she was also associate producer on the 2021 Oscar-winning biographical drama film Judas and the Black Messiah. She is currently completing her PhD at the W.E.B. DuBois Center at the University of Massachusetts Amherst.