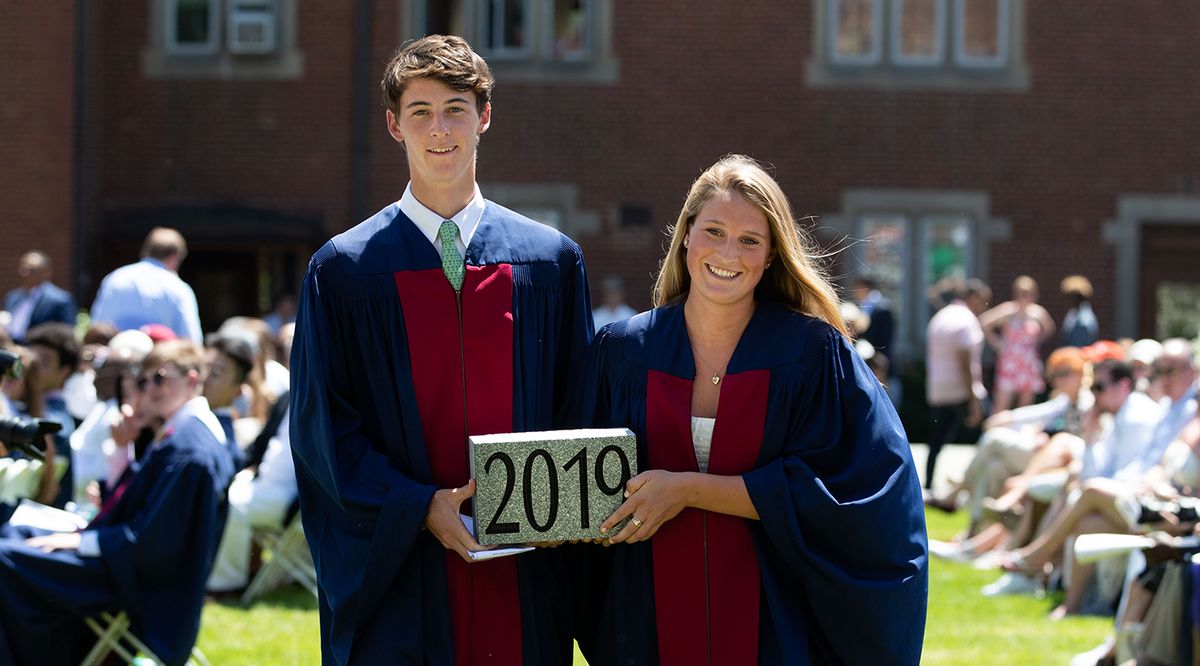 Under blue skies in Taft's Centennial Quadrangle, the Class of 2019 officially graduated during Commencement exercises on Sunday, May 26.

Headmaster William R. MacMullen '78 shared words of welcome with family, friends, and guests of the 177 members of the Class of 2019. Head Monitors Eva Baurmeister and Rex Riefler and Class Speakers Malcolm Bellairs and Margot Odden also delivered remarks to their classmates and guests and The Honorable Neil O'Leary, Mayor of the City of Waterbury, offered the Commencement address.

Photos of the day are now available online here.

A full list of prizes and awards are listed below.

Congratulations to the Class of 2019 and welcome to the Taft alumni community!

Presented to that faculty member who made their academic subject matter come alive and thereby induced enthusiasm and a love of learning among their students.

IN MEMORY OF JAMES PAYNTER LOGAN

Presented to that faculty member who showed exemplary commitment to working with students in a broad range of activities and demonstrated excellence by helping individuals develop self-esteem through positive achievements.

The Maurice Pollak Scholarship Award was established in 1992 by Mr. Henry Pollak II of the Class of 1940 and by his mother, Lucile R. Pollak, as a permanent memorial to his father, Maurice Pollak. The award provides aid to a deserving member of the graduating class to help defray expenses during the student's first year of college.

Harley Fish Roberts was a master at Taft from 1897 to 1930. In the early days of the School, he was Mr. Taft's main aid and colleague, in addition to being part owner of the School. The Roberts Scholarship was established to aid a deserving Taft senior through college.

This award is presented each year to the girl who has contributed most to Taft athletics.

Established by the 1967 Varsity Baseball team with the support of the student body and faculty, this award goes to the person who has contributed most to boys' athletics.

Named in memory of renowned theater critic Otis Love Guernsey, Jr., '36, the Guernsey Theater Award is given to that actor or actress who, through enthusiasm, cooperation and competence has contributed most to the theater at Taft.

In memory of Bill Waldron, Class of 1972, for exceptional contributions to technical theater

This award, established by the Taft Class of 1996 in memory of Mark Potter, who inspired art students at Taft for 40 years, goes to that student who has excelled in studio art.

Presented annually in memory of Thomas Sabin Chase, Class of 1950, to those students who in the study of art have exhibited a significant perception, originality, and developing talent.

For their exceptional contribution to Dance at Taft.

For excellence in Video Arts.

Instituted by the Glee Club of 1963 in honor of George H. Morgan, who headed the School's Music Department for forty years, this award is made to that member of the Taft School singing organizations who through ability, leadership, and enthusiasm has made the most significant contribution to the success, effectiveness, and wellbeing of those organizations.

Awarded to a member of the graduating class who has contributed significantly to music at Taft through leadership, personal achievement, and dedication to sound musicianship.

This award for outstanding independent work was established in 1964 in memory of David Edward Goldberg, Class of 1962, by his classmates, parents, and friends.

For the independent project,

"The Lexical Similarity Among the English, French, and German Languages."

This award was established by the family and friends of Mr. Sherman Cawley, a distinguished teacher of English and most valuable member of the Taft faculty for many years.

Presented in recognition of excellence in English scholarship to:

This award was established in memory of David Kenyon Webster, Class of 1940, by his friends and family.

Given in honor of Edward Gaylord Bourne, roommate of Horace D. Taft at Yale College in the Class of 1883, this award honors the outstanding student in History.

In honor of John T. Reardon, who was an outstanding teacher of history at Taft for thirty-seven years, this award goes to the student who has written the best essay in American history.

Established by the family of Daniel Higgins Fenton, who for twenty-two years, both as Chairman of the Classics Department and Director of Studies, made an unusually significant contribution to the School. This award is made to the student who has shown particular excellence in Classics.

For excellence in Spanish.

For excellence in Chinese.

Given for outstanding work in Biology, this prize honors Alvin I. Reiff, devoted Master Teacher for thirty years.

For outstanding work in Chemistry.

For outstanding work in Physics.

For excellence in computer science.

The Global Studies and Service Prize is presented to a student who has shown leadership through outstanding academic achievement in global studies and through a demonstrated commitment to service domestically and abroad.

The Global Studies and Service Diploma recognizes active citizenship, demonstrated leadership, and an understanding of the global dimensions of everyday life.

The "Non ut Sibi" Award, given by Harry W. Walker, Class of 1940, goes to that senior whose service and work outside of Taft best exemplifies the School's motto.

The Heminway Merriman Award, given by the friends and family of Junie Merriman,

Class of 1930, is awarded to those young men whose gentle concern for others best reflects the qualities of Junie Merriman.

Given by family and friends in memory of Berkley F. Matthews, Class of 1996, this award recognizes those young women whose loyalty, concern for others, and gentleness captures the remarkable spirit of Berkley Matthews.

In recognition of students who during their time at Taft have displayed exceptional personal growth and perseverance.

This award honors Joseph I. Cunningham, a member of The Taft School faculty for thirty-nine years. The award is presented to the seniors who, in the opinion of the Headmaster and faculty, have worked selflessly for the betterment of the entire Taft School community.

This award is offered at several preparatory schools by The Aurelian Honor Society of Yale to that senior who, in the opinion of faculty and classmates, is outstanding in sterling character, high scholarship, and forceful leadership.

This award is made each year to that member of the Senior class whose influence has done most for the School.