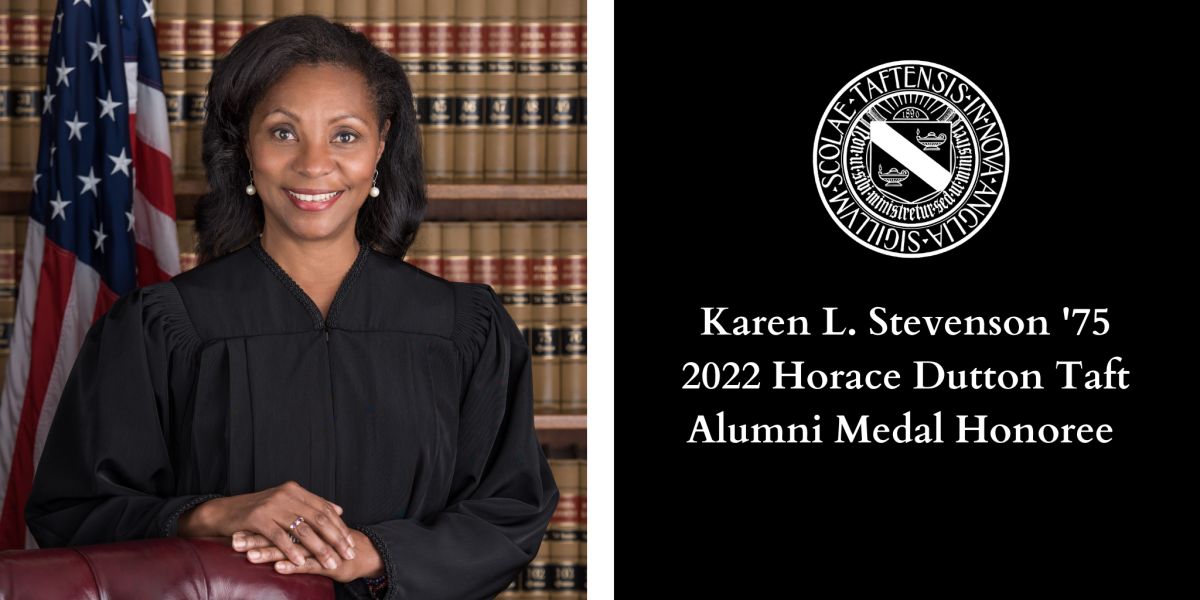 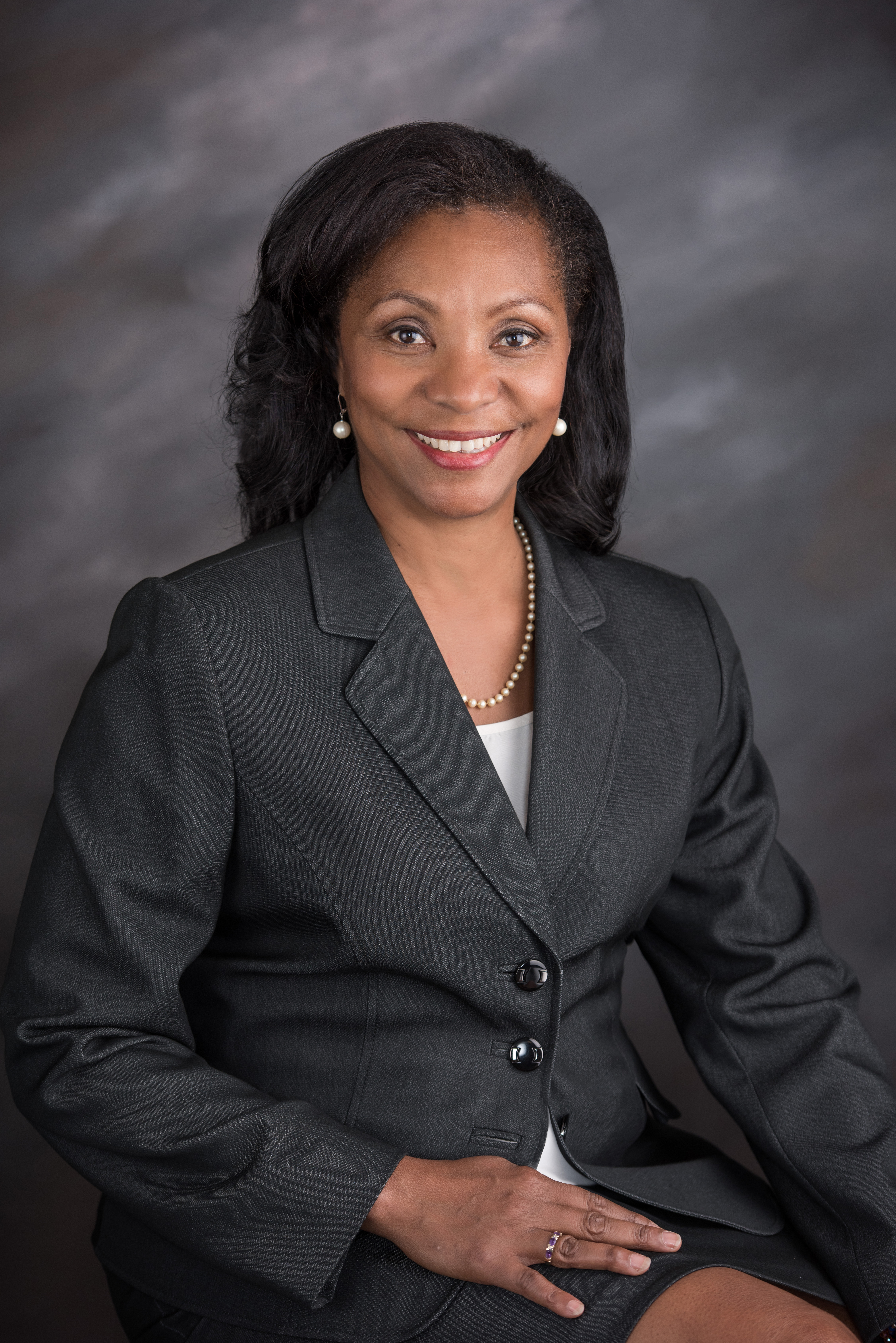 Karen Stevenson's life is a study in firsts. A member of the Class of 1975, she was among the first group of women admitted to Taft, the first Black woman to win a Morehead Scholarship at University of North Carolina (UNC) Chapel Hill, and in 1979, the first woman from UNC—and the first Black woman in the nation—to be named a Rhodes Scholar. Later, in the midst of a storied career as a trial lawyer, Stevenson became the first Black woman to serve as a federal magistrate judge in the Central District of California. Now Karen Stevenson '75 becomes the first woman of color to be honored with the Horace Dutton Taft Alumni Medal, given each year to a person whose life work best reflects the essence of the Taft School motto: Non ut sibi ministretur sed ut ministret; Not to be served, but to serve. Stevenson spoke to Taft students during a recent Morning Meeting, and received the medal the following day, during the annual Old Guard Dinner.

"As one of our most distinguished alumni, Karen Stevenson has excelled as an attorney and as a federal magistrate judge in the Central District of California," notes Floyd "Wink" McKinnon '60, Chair of the Horace Dutton Taft Medal Committee. "It is an honor to bestow Karen with this well-deserved award."

As a Taft student, Stevenson was engaged academically and as an athlete. After graduating in 1975, her commitment to Taft remained strong: she has served Taft as a Class Secretary and Trustee; was a member of the Board Committee on School Life; and is a member of the Horace Dutton Taft Legacy Society. Stevenson returned to Taft in 2018 as a Morning Meeting speaker.

"My four years at Taft gave me, a kid from a DC public school from a single parent home, an exceptional academic experience," says Stevenson.  "But more than academics, at Taft I learned that I could thrive in an unfamiliar land and that it matters to make it easier for those who follow. Being "first" is not nearly as important to me as making sure that there is a wide-open door for those who come behind."

After graduation, Stevenson made her mark as a Morehead Scholar and Phi Beta Kappa member at UNC Chapel Hill. Rhodes Scholarship in hand, Stevenson went on to earn an M.A. in European History from Magdalen College in Oxford, England. She continued her academic career at Stanford Law School, where she graduated with distinction in 1998. While there Stevenson and her teammate won the Marian Rice Kirkwood Moot Court Award for Best Team of Advocates.

Stevenson's groundbreaking term as magistrate judge in the Central District of California began in August of 2015 and will continue through 2023. The District comprises seven counties and serves approximately 20 million people, nearly half the population of the state of California.

Over the years, Stevenson's work, dedication to excellence in all aspects of her life, and service to the community have garnered recognition and accolades from her peers.

"I have known Karen for years, and there are few Tafties for whom I have as high respect," says Head of School William R. MacMullen '78. "Whether it has been seeing her during alumni travels or hearing her speak on campus to students, I have always found her deeply inspiring. She has embodied our school motto in an extraordinary way—with brilliance, dedication, passion and principle."

To wit: Stevenson is a Fellow of the American Bar Foundation, co-authors the Thomson Reuters Federal Civil Procedure Before Trial Practice Guide, and was elected to the American Law Institute (ALI) in 2020. She was nominated as one of the Top 100 Women Litigators by the Women Lawyers Association of Los Angeles and in March 2015 was named by Savoy Magazine one of the nation's Most Influential Black Lawyers.  She has been a member of the Editorial Board of the ABA's Litigation News and Litigation Update since 2008 and served as Editor-in-Chief in 2014-15. She was named a Super Lawyer (Rising Star) in 2005, 2007 and 2008. She currently serves on the L.A. County Bar Association Litigation Section Executive Committee, and frequently speaks on electronic discovery, the admissibility of electronically stored information, cybersecurity, and social media. She has been a featured presenter at the Pincus "Federal Court Boot Camp" CLE programs.

In the broader community, Stevenson has served as a trustee to the Rhodes Trust at Oxford University and the District Secretary for Rhodes Scholarship selection committee in Southern California. She is a past president of the Women's Care Cottage, an organization serving young women coming out of emergency shelters, foster care, and probation who need a transitional living program to help them start a new life and develop the ability to live independently with pride and dignity, and has served on the Culver City Chamber of Commerce, and on the Board of Directors of the Arts and Sciences Foundation for the University of North Carolina, Chapel Hill.

"I am deeply honored to be selected for this award and to join the many exceptional past recipients."

The Horace Dutton Taft Alumni Medal is the school's highest alumni honor and is given each year to a person whose life work best typifies the school motto: Not to be ministered unto but to minister. The recipient's life and actions must demonstrate something humanitarian apart from a vocation or service. He or she must have gone above the ordinary demands of life or occupation. Success in a chosen field does not necessarily qualify a person for the honor. At the same time, it is possible for a person to be eminently successful and go beyond the call of duty to serve others.

An alumni committee meets each January to review names that have been recommended by fellow alums and to determine the recipient. Alumni are encouraged to put forth the name of an alumnus or alumna to be considered. Eligibility for the Horace Dutton Taft Alumni Medal is also extended to those who are or have been connected with the school or who have shown special interest in Taft. Candidates must be living to receive the award. The award is typically bestowed at the Old Guard Dinner on Alumni Weekend.