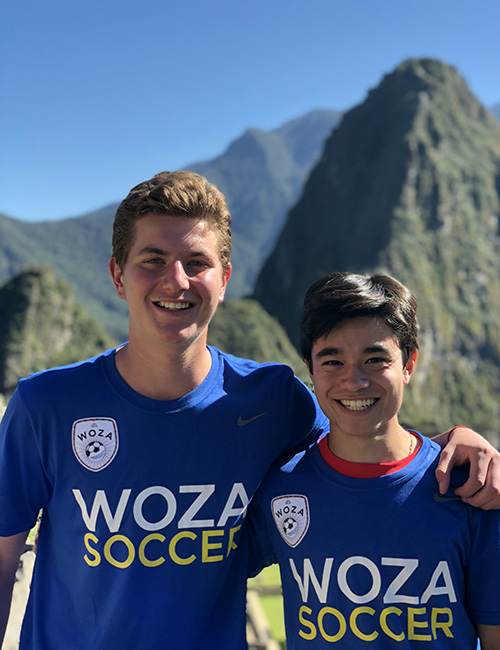 In many parts of the world, the Zulu word “woza” is ubiquitous on the soccer field. It can be a plea for a quick pass, an expression of frustration, or simply “soccer speak” that transcends geography to unite players and cultures. For Upper Mids CJ D’Virgilio and Ian Staines, it was the latter: CJ and Ian traveled to South America with Seattle-based Woza Soccer last summer, where they built cultural bridges by “speaking soccer” with children in the mountains of Peru.

“I’ve been playing soccer my whole life and had always heard people say, ‘soccer is such a great sport because of the way it connects people across the world,’” says CJ. “I felt that, and believed that, but had never really experienced it until I went to Peru.”

For 18 days, CJ, Ian, and a dozen Woza volunteers traveled through the remote villages and towns of Peru’s Sacred Valley, nestled high in the Andes. With the ancient and historic Incan town of Ollantaytambo as their base, the group visited rural mountain villages gifting schools and communities with soccer gear, organizing scrimmages, and leading soccer clinics and drills.

“We spent time with children who live the kinds of stories we may hear about and read about, but don’t often see first-hand—children with limited access to resources and education; children with poor nutrition and hygiene,” Ian explained. “Seeing the world through their eyes was an important lesson in perspective, and a really inspiring part of our experience.”

During their stay, Woza volunteers traveled 90 minutes by bus from Ollantaytambo to the remote, indigenous village of Huilloc. Nearly 200 traditional Quechua families live in stone-and-thatch houses in the village, where daily life revolves around farming and weaving.

“The children in Huilloc speak Spanish and Quechua,” Ian explains. “In the beginning, we just kicked the ball around. After a day or two, the kids felt comfortable with us, and taught us a bit of Quechua, things like how to count, and a few other simple words. That connection happened through soccer; soccer broke the ice, and the relationship grew from there.”

For CJ, the language of soccer took on a more literal meaning.

“I was playing with a young man who kept pointing at my cleats, and saying ‘control, control,’” CJ recalls. “It took me a few minutes to realize that the world ‘control’ was printed on my cleats in really the tiniest, tiniest script. He was reading the English word, and used it as a way of connecting with me in my own language. We were both soccer players—we could pass and we could move and we could communicate on the field—but he found a way to reach beyond that. That was just amazing to me.”

The Woza group visited schools, played with a municipal team made up of older teens with dreams of pro careers, invited local residents to join them on rented pitches, and improvised pick-up games with anyone and everyone, including a group of workmen on the side of the road when the Woza bus broke down.

“There was always this feeling that soccer really is a common language,” says CJ. “You can get to know so much about someone just by the way they pass the ball, the way they run, the way they stand, the way they cheer when they score a goal.”

The best moments for Ian were those he shared with the country’s youngest players.

“We spent our last day in Ollantaytambo with a group of kids we had never met. I think they were in preschool or Kindergarten,” Ian explains. “We divided them into two teams. As time went by, all of the kids gravitated to my team. When we scored, they all rushed me screaming with joy, laughing and pulling me to the ground. It was definitely one of the best moments of my life—definitely magic.”

And it was the connections felt in those moments that defined the experience for both Ian and CJ.

“I went on the trip excited to see Peru, excited to play a game I love, and excited to combine that game with my desire to work in service to others,” says CJ. “What I didn’t expect was the way so many little things would have such a big impact on me. It’s so cool that I could go to a place where I didn’t speak the language, I didn’t know the culture, I didn’t know how to fit in and still never feel like an outsider. I felt so at home and so connected simply because I could kick a ball with my feet and someone would kick it back. It may sound cliché, but there really is so much more that connects us than divides us.”